The Funko Pop! Movies Stay-Puft has arrived!! No 30th Anniversary Ghostbusters celebration would be complete without the marshmallow man. Is he a man though? After all he’s made of marshmallows. At some point the philosophical questions had to be thought about.

Funko considers Pop! Stay-Puft Marshmallow Man an oversize vinyl figure. When you see the box up close or compared to the Pop! Ghostbusters figures you can immediately see why. At 6 inches tall, Pop! Stay-Puft towers above his human adversaries. With his appropriately sized vinyl marshmallow head, Funko designed a box that they hope can contain a brand character that was once brought to life by an ancient Mesopotamian god. 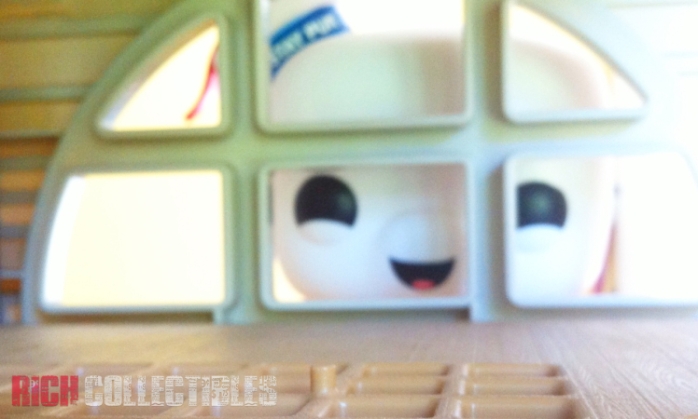 What did you do Pop! Ray? Well maybe thinking of a vinyl marshmallow man figure based off a brand of marshmallows enjoyed at Camp Waconda is the most harmless thing.

As I can’t go to Australia or Indonesia until the Pop! Ghostbusters deal with non existent Pop! Gozer, I’ll do my best with a 6 inch vinyl Stay-Puft Pop! figure.

If, like myself you grew up with Kenner’s The Real Ghostbusters Marshmallow Man figure Funko’s version isn’t entirely different then what Kenner first produced around 1987.

The marshmallow head defines the scale, the arms and legs were shortened perhaps by a previous supernatural toy battle. Check out that expression. So much happiness and love. This isn’t a marshmallow figure that wants to harm your under $20 USD collectibles. The smile makes you want to add a new reminder to your fruit phone to buy marshmallows next time you’re out.

The wrinkles to define the extremities and the vinyl ribbon on the sailor hat add to the details. Maybe it wouldn’t have looked right or like the other Pop! Ghostbusters Funko didn’t want parts that could become damaged. I would have liked the vinyl ribbon to extend to the kerchief. Wow, I literally pulled that word from a childhood memory of scouting.

The only fault I can see with this Pop! figure is with the hat. The blue paint doesn’t entirely match and isn’t complete. The Stay-Puft decal wasn’t applied correctly. If Funko left off the hyphen, that’s ok. It wouldn’t be the first time a licensee didn’t include it. On this one, the last “T” is tilted. It kinda works for these vinyl figures.

Neither is a reason I’d send it back for a new one. In fact I’ll be buying at least one more Pop! Stay-Puft figure (109) when I’m able to. US retailer Hot Topic has had an exclusive “roasted” Funko Stay-Puft Pop. Their’s also a red “angry” 2014 SDCC Stay-Puft from California based Fugitive Toys, and finally the 2014 SDCC version that glows in the dark.

Funko Pop! Movies Stay-Puft retails for $15.99 USD. I was able to buy from Amazon for $14.99 USD (before shipping/tax) with part of the sale going towards a charitable donation.