The Queensboro Bridge, also known as the 59th Street Bridge – because its Manhattan end is located between 59th and 60th Streets – and officially titled the Ed Koch Queensboro Bridge, is a cantilever bridge over the East River in New York City that was completed in 1909. It connects the neighborhood of Long Island City in the borough of Queens with Manhattan, passing over Roosevelt Island. Source: Wikipedia entry. 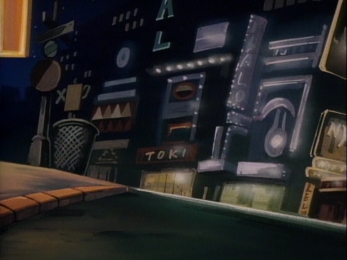 It Just Popped In There: Good thing that guy who was grumbling to himself about something had just enough old, worn out clothing which to fit a small creature.

It Just Popped In There: I remember as an 8 year old knowing the break dancing trio was of its time. Thirty years later, its nostalgic and has 1980 something written all over it.

Sorry I (Didn’t) Miss It: This cab on the Queensboro Bridge has a roof advertisement which reads “Buster.” Even at 8 it was immediately noticeable. I guess it was just easier to use then coming up with a fake brand for a small part of an overall scene.

It Just Popped In There: Why would the creatures rip into the vehicles on the bridge? Is it because they don’t understand what they are? Or does it perhaps serve another yet unknown purpose to us?

It Just Popped In There: How did they choose the Queensboro bridge? How long have they been there?

You’ll Need A Reference: Slimer (then known as Onionhead) slimed Peter for the first time at the Sedgwick Hotel in Ghostbusters. This is referenced at times throughout The Real Ghostbusters. Its also a running gag, that Peter is for some reason slimed by Slimer.

In the previous episode, Slimer, Come Home Peter had an argument over and about Slimer’s behavior where he left The Real Ghostbusters. In real at that time, it was only a week ago. I guess Peter wasn’t thinking of that or his real feelings as he was waking up.

Sorry, I Missed It: Ray isn’t wearing his black undershirt.

It’s Technical: Naturally Egon can’t use a regular or electric toothbrush. His version seems clunky, as it is Egon, its probably more efficient.

You’ll Need A Reference: Egon’s pajamas have a chain of molecules design on them.

A molecule is the smallest particle in a chemical element or compound that has the chemical properties of that element or compound. Molecules are made up of atoms that are held together by chemical bonds. These bonds form as a result of the sharing or exchange of electron s among atoms. Source: Whatis entry.

It Just Popped In There: Normally a breakfast like Winston is making could go to waste when there’s a call. Then I remembered they live with the ghost vacuum Slimer.

Its Technical: Janine’s computer has a way to watch live television.

It Just Popped In There: I wonder if in 1986 their was a computer that could have say a coaxial cable. As a monitor is basically a display anyway. Computer TVs seem more early 1990s.

Location: New York City. On The Way To The Queensboro Bridge

Quote: “I checked Tobin’s Spirit Guide. The only reference to Trolls is fabled dwarfs living in caves or under bridges.” – Egon

Quote: “That’s it, like in the Three Billy Goats Gruff.” – Ray

“Three Billy Goats Gruff” is a Norwegian fairy tale. The fairy tale was collected by Peter Christen Asbjørnsen and Jørgen Moe in their Norske Folkeeventyr, first published between 1841 and 1844. Source: Wikipedia entry.

Quote: “They don’t trust humans. They don’t want anything to do with people or cities.” – Egon

It Just Popped In There: Their isn’t even a thought of saying, let alone animating tear gas in a cartoon meant for children today. It isn’t something I knew what it was or did as an 8 year old.

Sorry, I (Didn’t) Miss It: Why does that vehicle have “Spook S llow” scrolled onto it? I think its suppose to read “Spook Show” The animation for a quick shot didn’t connect the two Ls.

It Just Popped In There: The screen cap is larger then most to also show I didn’t waste my time in trying to get this specific screen cap. It was a pain. 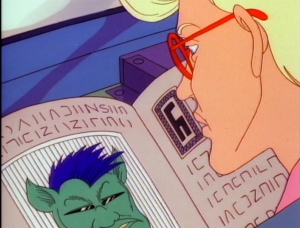 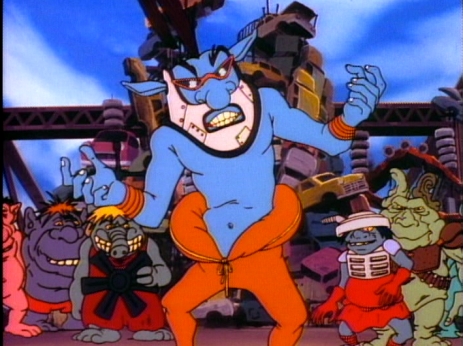 Sorry, I Missed It: ECTO-1 front license plate is missing the word ECTO-1.

It Just Popped In There: Do The Real Ghostbusters usually carry a surrender flag with them? Did Peter really expect the troll leader to speak English? He isn’t a ghost.

Tobin’s Spirit Guide: We can presume the troll language is in TSG or enough of it that Egon can have a conversation with the troll leader.

Location: New York City. On The Way To Find A Troll

The Holland Tunnel is a highway tunnel under the Hudson River between Manhattan in New York City and Jersey City, New Jersey. It carries Interstate 78, and in New Jersey is also designated NJ 139. An integral conduit within the New York Metropolitan Area, the tunnel was originally known as the Hudson River Vehicular Tunnel or the Canal Street Tunnel. It was the first of two vehicular tunnels under the river, the other being the Lincoln Tunnel. Both are operated by the Port Authority of New York and New Jersey. Source: Wikipedia entry.

Times Square is a major commercial intersection and neighborhood in Midtown Manhattan, New York City, at the junction of Broadway and Seventh Avenue, and stretching from West 42nd to West 47th Streets.

Brightly adorned with billboards and advertisements, Times Square is sometimes referred to as The Crossroads of the World, The Center of the Universe, the heart of The Great White Way, and the “heart of the world”.

You’ll Need A Reference: Ray might be loosely referencing 1950s B-Rated films, that often depicted overgrown bugs. Such as Them! from 1954.

Sorry, I Missed It: Ray’s hair is a different color, more brown then reddish.

It Just Popped In There: It isn’t probably the best idea to just leave ECTO-1, unlocked with nuclear equipment in the back. I realize traffic is backed up, still its a calculated risk from Egon.

It Just Popped In Their: I’m sure seeing an ice cream truck in this episode as a kid made me smile. Where I grew up in northeast NJ, about 35 miles away from Manhattan we had both an ice cream truck and an Italian Ice truck come down our streets.

It Just Popped In There: Do you suppose as Ray and Winston were running after a troll before meeting up with Egon and Peter, Winston had to drop his ice cream? 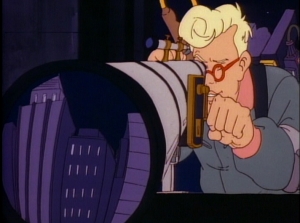 The Empire State Building is a 102-story skyscraper located in Midtown Manhattan, New York City, on Fifth Avenue between West 33rd and 34th Streets. It has a roof height of 1,250 feet (381 m), and with its antenna spire included, it stands a total of 1,454 feet (443 m) high. Its name is derived from the nickname for New York, the Empire State. It stood as the world’s tallest building for nearly 40 years, from its completion in early 1931 until the topping out of the original World Trade Center’s North Tower in late 1970.

It Just Popped In There: How come the club goers in the background (sorry, I missed it: who aren’t moving) aren’t reacting to something strange?

You’ll Need A Reference: In Ghostbusters right before the would be Ghostbusters confront the library ghost to supposedly capture her, Ray yells “Get her!” 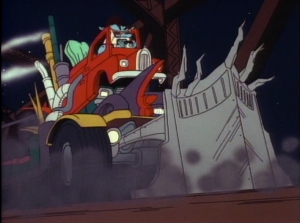 You’ll Need A Reference: More or less this whole time the trolls have used the car parts to either wear and to build this wild ride. I wouldn’t have known this in 1986, their appearance and this type of vehicle probably came from the Mad Max movies.

It Just Popped In There: I understand needing some police presence at the bridge during this crisis. It seems like everyone has been there for the entire 12 hours. 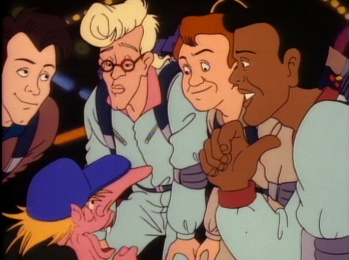 Sorry, I (Didn’t) Miss It: On the close up where The Real Ghostbusters are with this troll, Egon is suddenly wearing mostly one of Winston’s uniform.

You’ll Need A Reference: As the fireflies are rampaging buildings, a billboard sign reads FONY. If it could have, it probably would have read SONY. At the time the Ghostbusters franchise was owned by Columbia Pictures. Ironically (somewhat) Sony Pictures would buy Columbia. Owning the rights to the Ghostbusters movies also under the Columbia brand and The Real Ghostbusters. 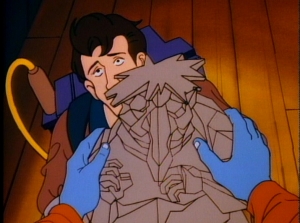 It Just Popped In There: The Real Ghostbusters (particularly Peter) were taking a gamble that the other trolls couldn’t read in English either. The plan was clever since they liked this troll and didn’t want to cause harm to him.

It Just Popped In There: Do The Real Ghostbusters always carry a large amount of cash with them?

It Just Popped In There: Let’s hope these same trolls don’t decide to visit any bridges in Chicago. 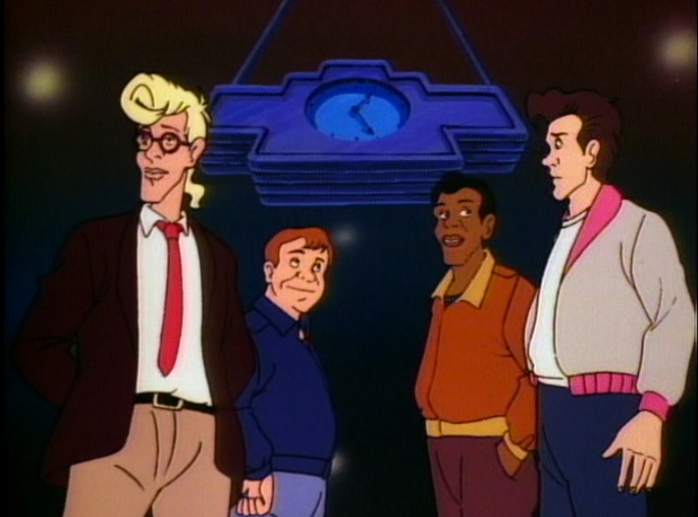