Synopsis: After ruining Winston’s birthday surprise, Slimer leaves the Firehouse for good and wanders the streets of New York… where he soon joins in with a bad crowd of Poltergeists! 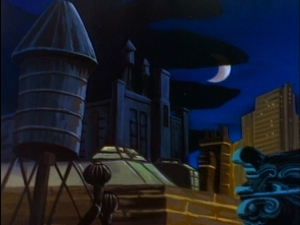 Sorry, I Missed It: The animation on Ray looks a little funky. Also, (possibly) being an early episode the rear seating is different.

It Just Popped In There: Why are The Real Ghostbusters wearing their Proton Packs while they’re driving?

Quote: [Talking quietly to Ray] “At least it gives us an excuse to keep Winston out of the station until you know what’s ready.” – Peter

It Just Popped In There: Egon who decided not to continue using a P.K.E Meter can’t detect a ghost, he is close to enough to hear the first one. He might have seen it as well. Instead of checking the trash can, Egon walks away! Maybe I need a just a children’s show category.

Quote: “Looks like the trash wants to take us out.” – Peter

It Just Popped In There: Those small class ones can’t, I’m guessing the big one with the fancy top hat will make a night less fun.

It Just Popped In There: Really Peter, blast them? They’re metal garbage cans and you’re using nuclear accelerators. What did you think the outcome would be?

Quote: “Okay, so I saw a Clint Eastwood movie last night and I got carried away.” – Peter

You’ll Need A Reference: Clint Eastwood is an actor and director who is known for his classic westerns.

Quote: “Wait a minute. Didn’t I see this in The Wizard Of Oz?” – Peter

You’ll Need A Reference: The Real Ghostbusters who are caught in a tornado like wind has Peter commenting about author L. Frank Baum’s movie adaption from 1939. Where a tornado somehow takes Kansas resident Dorothy and her little dog to the colorful land of Oz.

Sorry, I Missed It: The “no ghost” logo on Ecto-1’s passenger side door is backwards, at least for an audience in the United States. Technically its correct on other continents, such as the one where The Real Ghostbusters was animated.

It Just Popped In There: The key word is “suppose to.” Its Egon so I believe him. Who actually studied Poltergeists to find out how weak they can get when they roam out of there area?

It Just Popped In There: Unless Winston had gone back out, wouldn’t it seem out of place that Ecto-1 isn’t parked inside and the lights are out. And If he hadn’t gone out, how could they surprise him by parking outside and then what, mysteriously going inside another way?

Quote: “I just want you to know, I’m having a wonderful time.” – Egon

It Just Popped In There: How much can ectoplasm stretch anyway? Egon and Ray should really get around to studying that. Either way eating a whole cake (with no milk to drink) can’t be good for anything.

It Just Popped In There: As an adult you can sorta see Peter’s point of view concerning Slimer. Also when one has negative feelings, they don’t really mean what they’re saying.

Yelling about Slimer and to Slimer reminds me of when one needs to reprimand a pet.

You’ll Need A (Iconic) Reference: In GHOSTBUSTERS on the guys first call Peter came across Slimer (Onionhead) in a Sedgwick hotel hallway. After it was apparently insulted by Ray, (who tried to bust it earlier) the ugly little spud flew down said hallway, sliming Peter.

Quote: “I’m a secretary. I can read anything.” – Janine

It Just Popped In There: Slimer’s letter (thoughtful to write something before taking off) is written like a child could write a similar letter.

It Just Popped In There: Three out of the four The Real Ghostbusters (who were just in their PJs) got fully dressed and geared up in a flash!

Not For Sale: Winston is wearing a baseball cap with a “no ghost” logo on it.

It Just Popped In There: Was Ecto-1 parked outside in the rain while the guys were sleeping? Once the party was over you would think it would be inside, safe and sound.

It Just Popped In There: As tempting as that delicious candy would be, and as the store is closed for the night, that would bring a whole different set of problems.

What kind of message would that be for a children’s cartoon? At least this time Slimer was thinking and not just acting. 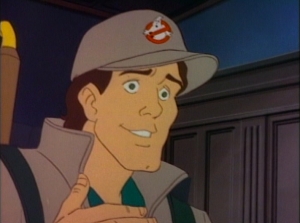 Not For Sale: Peter is also wearing a baseball cap with a “no ghost” logo on it.

It Just Popped In There: Does that building with lightening around it remind you of a similar building?

It Just Popped In There: I know Slimer’s out there on the streets trying to figure out the un life. He doesn’t have to get mixed up with the wrong kinds of ghosts.

Sorry, I Missed It: Winston’s Ghost Trap doors are missing colors again. C’mon animators it was the character’s birthday! 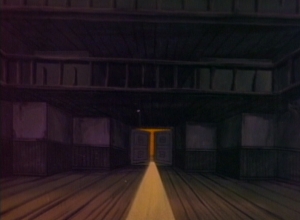 You’ll Need A Reference:  In GHOSTBUSTERS Onionhead aka Slimer was referred to by Ray as a Class V, full roaming vapor. Perhaps Egon didn’t want to share that piece of information with this upstanding member of the community.

It Just Popped In There: Even if that theory were completely true, aren’t in another theory The Real Ghostbusters running out of time to get to Slimer? Was Ray listening to Egon and Winston earlier? 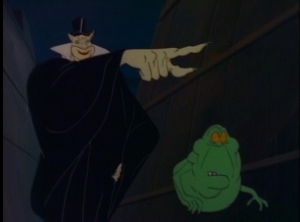 It Just Popped In There: Why would it matter if or how scary Slimer is to the ghost with the top hat if basically all he is going to do is absorb Slimer’s energy? Proving at times ghosts aren’t always smart, Slimer is a ghost. Check. √ If a human who doesn’t know who Slimer is and runs into him, s/he is (probably) going to be afraid.

It Just Popped In There: I know originally three out of the four The Real Ghostbusters split up to look for Slimer. If they had taken Ecto-1 they could have covered more ground in less time.

It Just Popped In There: Winston asked earlier (for the adult children who were watching at home on their Macs) about what could happen to Slimer. Yeah, its been a long night, remember the 18ish minutes plot! 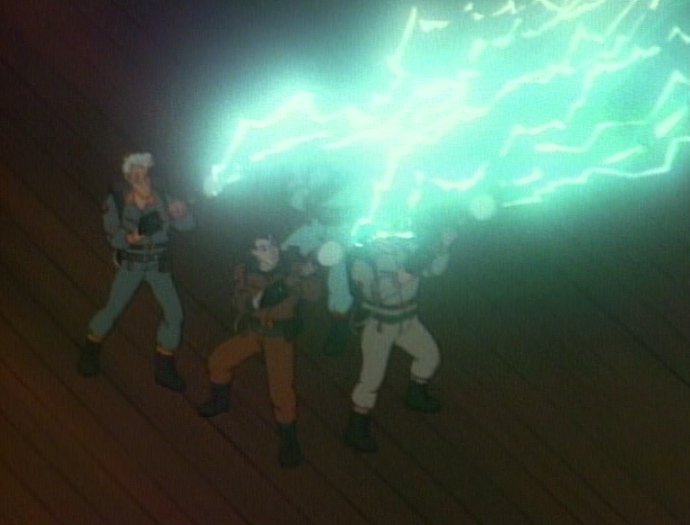 It Just Popped In There: After The Real Ghostbusters get their Proton Packs back, they begin firing proton streams at top hat ghost. The frequency is still set for Slimer (or a Class V. I’m guessing) If the frequency isn’t changed, I wouldn’t think it would help to capture a more powerful ghost. Even with a Ghost Trap. 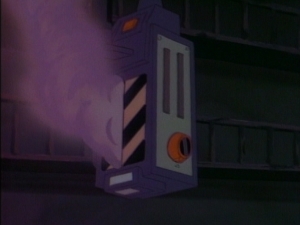 Its Technical: “There are too many ghosts in the trap. It wasn’t made to hold that many. It could overload at any second.” – Egon

It Just Popped In There: If they had taken ECTO-1 earlier, they could get back to the firehouse faster. 😀 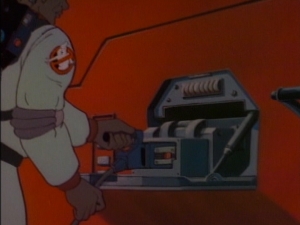 It Just Popped In There: With the urgency of what could happen to an overloaded Ghost Trap going into the Ecto-Containment Unit where there are even more ghosts, you would think all 4 The Real Ghostbusters would have been downstairs.

Quote: “Yeah, even scientists learn from their mistakes.” – Peter

It Just Popped In There: Yeah, about having more then one dessert. A welcome home party for something that didn’t need to happen in the first place?

We were kids, another party in general did make sense. As adults The Real Ghostbusters should have had two parties, the second out elsewhere.

Such as a McDonalds with a play land or an arcade.