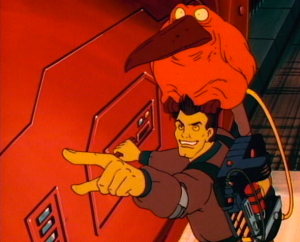 Synopsis: After The Real Ghostbusters had unplugged Killerwatt the week before business has slowed down considerably. That is until a “little old lady” named Mrs. Rogers calls about her haunted house. Mrs. Rogers and her house are more then they appear.

It Just Popped In There: Mrs. Rogers lion bushes remind me of the lion statues at the main branch of the New York Public Library.

You’ll Need A Reference: The stone lions at the New York Public Library were sculpted by Edward Clark Potter and were named Patience and Fortitude during the 1930s by New York Mayor Fiorello LaGuardia.

Not For Sale: Peter is wearing a khaki color baseball hat with the Ghostbusters logo on it.

Sorry, I Missed It: Janine’s nails aren’t painted red any longer when she hangs up the phone the first time and then proceeds again filing her nails. Her nail polish remains missing through the second phone call too.

You’ll Need A Reference: While driving to the client’s house Winston reads the address, 1313 13th Street. The number 13 is considered an unlucky number in some countries and across religions. Fear of the number is called Triskaidekaphobi.

It’s Technical: While The Real Ghostbusters are walking up to Mrs. Roger’s house Egon is using his P.K.E Meter. It overloads, Egon suspects sabotage. This is the first episode where a paranormal disturbance causes a P.K.E Meter to overload.

It Just Popped In There: The ghost in the painting by Winston resembles the Boogieman who we’ll get to know in the season 1 episode The Boogieman Cometh.

You’ll Need A Reference/Tobin’s Spirit Guide “What is a dominant force of the underworld. Leader of a legion of evil demons. What’s goal is to invade and conquer the living world.”

It Just Popped In There: If Janine is going to give a client a tour of the firehouse, why start with the basement where The Ectocontainment Unit is located?

It’s Technical: The Ectocontainment Unit has a new fingerprint/voice analyzer.

It Just Popped In There: What was Janine checking with the ECU that she needed to write or check something off on the clipboard?

Sorry, I Missed It: Ray wasn’t wearing a proton pack when he was driving onto the bridge. He is wearing one when he gets out of the car at Mrs. Rogers house.

You’ll Need A Reference: Ray describes the paranormal phenomena at Mrs. Roger’s house as a mass trans migration. Should that be capitalized?

It’s Technical: If you’re Egon you can fix a P.K.E Meter with a screwdriver during a mass trans migration.

It Just Popped In There: I know The Real Ghostbusters want to defeat what they believe to be What. Shouldn’t they wait until either Egon moves or tells him what they’re about to do?

It Just Popped In There: The ghostly furnace looks similar (minus the arms and hands) to the ghostly stove in the previous episode, Killerwatt.

It’s Technical: Did the trap explode when the ghostly furnace “ate” it, causing the furnace to blow apart? This may be the first ghost trap The Real Ghostbusters have lost.

You’ll Need A Reference: The storyboards for this episode (found on the box set) has Ray throwing an “Ecto-Gernade,” instead of a trap.

It Just Popped In There: Does Janine typically allow clients to wander around alone through the firehouse? Or just the sweet looking old lady types? She wouldn’t have if she had seen the charred marks on the file cabinets caused by What’s bird, Precious.

It Just Popped In There: The Real Ghostbusters should think about putting a fingerprint/voice analyzer on the basement door. Or least close it.

It’s Technical: When What turns off the containment unit Ray said in 30 seconds it would go “kablewie.” In the previous episode, Killerwatt we were informed it takes 60 seconds or a minute for the ECU to shut down.

How come the shut down alarm isn’t going off? Maybe its only because What only unlocked the unit and not shut it down. After all Ray, Egon, Winston, and Janine were at the top of the stairs. Perhaps Ray didn’t see that or overreacted in what is a tense situation. Besides, don’t they have the generator Egon installed to prevent this exact scenario?