Synopsis: Through paranormal means, Ray’s favorite comic book character, Captain Steel, comes to life, and crosses paths with the Ghostbusters. When the evil Doctor Destructo also comes to life, a hero team-up may be the only way to save the world.

You’ll Need A Reference: The title generally refers to (super) heroes saving the day. When the Ghostbusters were growing up Mighty Mouse (a super man like mouse) was on during the 1950s to the 1980s. The third lyric:

“Here I come to save the day!”

Quote: “A failure of the Storage Facility? Are the ghosts escaping?” – Egon

You’ll Need A Reference: Ray is clearly upset (not over Gozer though) and it could be a good guess to think either the Containment Unit could have somehow failed. Or Gozer the Gozerian from GHOSTBUSTERS™ (and mentioned previously in The Real Ghostbusters) could also somehow be back. However..

It Just Popped In There: Perhaps in the moment Egon wasn’t being rational. The Ecto-Containment Unit has fail safes going back to the earliest episodes. If something was wrong, they’d hear the alarm(s) and at some point flashing lights. Ghosts were escaping, either their equipment would detect them and/or they’d also see them. As for an “ecto alert” Janine would most likely let them know if they had received a call.

Quote: “Egon, Captain Steel is my hero. He’s a reason I became a Ghostbuster. To battle the forces of darkness.” – Ray

Quote: “Oh sure, Moby Dick was just a big fish. Fettuccines was just an opera.”

You’ll Need A Reference: Moby-Dick or The Whale is a novel written by Herman Melville and published in 1851. It wasn’t highly regarded throughout the 19th Century. It would become one of the great American novels.

You’ll Need A Reference: If people think of fettuccine, its probably because of the known Italian pasta. It’ll also can refer to opera and today charitable organizations. Ray might have also thought of Broque Opera Company’s ”The Ring of the Fettuccines” which had performances in New York in February 1981.

Also, related to a Ghostbusters movie to come within two years Peter Venkman (Bill Murray) referred to the positive painting of the Ghostbusters has been painted by “one of the Fettuccines.”

Quote: “Of course I can. He just said so. You have no right to interfere in our battles.” – Dr. Destructo

Quote: “Right, what are you talking, right. I created you guys. Not to mention Delta city, police commissioner Grady, and the whole nine yards.” – Len Wolfman

Quote: “You can’t do this Steel, its against the Comics Code.” – Dr. Destructo

You’ll Need A Reference: In 1954 the Comics Code Authority was founded by the Comics Magazine Association of America. It was an alternative to then government regulation.

Sorry, I Missed It: When Ray is sitting at Len Wolfman’s art desk parts of his Neutrona Wand are the wrong color.

Quote: “What can I say? It wasn’t selling anymore. Kids are too hip nowadays to believe in a do gooder like Captain Steel.” – Len Wolfman

Quote: (To Winston) “Next, we’ll be busting the Tooth Fairy.” – Peter

You’ll Need A Reference: Buster is a Tooth Fairy that once befriended The Real Ghostbusters.

Quote: “Yeah, I think I saw you in Macy’s parade.” – Older Police Officer

You’ll Need A Reference: Macy’s, one of America’s department stores had has a parade during Thanksgiving in NYC since 1924.

You’ll Need A Reference: One of the classic Superman quotes when people see Superman (also known as the man of steel) up in the sky.

It Just Popped In There: Up to this point it isn’t clear that Captain Steel or Dr. Destructo are exactly ghosts. Yeah, they are too real. We also don’t know what else Len Wolfman told The Real Ghostbusters. Comic book characters coming to life is strange and something The Real Ghostbusters would look into.

Quote: “Surender, in the name of justice.” – Captain Steel

Quote: “Captain Steel you got it all wrong. We’re on your side.” – Ray

Quote: “That’s what they all say.” – Captain Steel

Tobin’s Spirit Guide (Ok, Spengs’ Superhero Guide): Captain Steel is obviously strong, can fly, and like supermen (and women) from that one green planet has the ability to shoot “heat rays” from his eyes.

It’s Technical/It Just Popped In There: As Captain Steel isn’t real, his heat rays didn’t seem to harm the Neutron Wands. Also if Peter’s attempt to capture Captain Steel wasn’t successful, why did the others make the same mistake?

You’ll Need A Reference: Dr. Destructo has a similar look to an evil Transformer, Megatron. Both The Real Ghostbusters and Transformers were 1980s cartoons. If Dr. Destructo sounds that familiar. Its because Frank Welker voiced Megatron along with Ray Stantz, Slimer, and other characters throughout his career. Including one that dealt with mysteries.

Tobin’s Spirit Guide (Ok, Spengs’ Superhero Guide): Dr. Destructo has a type of suit that houses a small, but powerful energy weapon. When fired at Captain Steel it can bend around him like a rope. Dr. Destructo also has fists that seem to be powered by thrusters once they’re “released” towards Captain Steel. Once the target is reached, they return to Dr. Destructo.

Quote: “How did you know crossing the streams would do that?” – Winston

Quote: “Well, why didn’t you say so before?” – Captain Steel

Quote: “We got to find him (Dr. Destructo) before he unleashes whatever fiendish plan he’s concocting.” – Captain Steel

Quote: “I love it when you say stuff like that.” – Ray 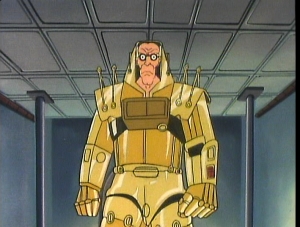 Quote: “Dr. Venkman won’t like this. He hates to pay me overtime.” – Janine

Sorry, I Missed It: The passenger side door of Ecto-1. Its “no ghost” logo isn’t drawn well. Its also backwards. Considering the animation was done in Asia, the logo could be the international equivalent.

It Just Popped In There: Where have I heard something like that before? 😉

Quote: “All he did was change his clothes and put on a pair of glasses. Some disguise.” – Peter

• Quote: “He could adapt the Power Grid to run his evil devices.” – Egon

• Quote: “This is serious Peter, if Destructo disconnects the power..

• Quote: “Don’t tell me. I remember the last time it happened.” – Peter

You’ll Need A Reference: As I’m not reviewing episodes in order, I don’t know without looking into it when it last happened. It certainly happened in early episodes. We know the first time it happened. “It’s a sign alright.” – Janine Melnitz

Quote: “Where does he put the suit?” – Peter 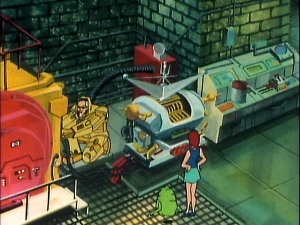 • Quote: It will turn every man, woman, and child on Earth into mindless zombies under my control.” – Dr. Destructo

• Quote: “You ought to work in television programming.” – Janine

It Just Popped In There: I realize time is of the essence, was it really necessary for Peter to fire a confinement stream at the basement door to “open” it?

Quote: “Even you aren’t fast enough to stop me Steel.” – Dr. Destructo

It’s Technical: By pushing a button on a Ecto-Containment panel Ray is able to open the ECU’s trap door without releasing any ghosts. Causing a vacuum to pull just Destructo towards it.

It Just Popped In There: It’s a good thing despite Dr. Destructo’s modifications, that function still works!

Quote: “Hey, how’d you guys like to be the heroes of my next series?” – Len Wolfman