The History Of A Rich Proton Pack Replica Pg. 1 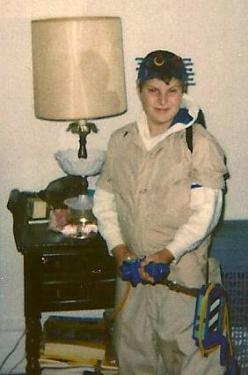 I received a Kenner The Real Ghostbusters Proton Pack either for Christmas 1987, where I imagine I was generously gifted first series toys or by/for my birthday in 1988. If you owned one with its yellow nerf like proton stream you know how awesome it was. I still have memories of catching Slimer for example alongside the Ghostbusters. That’s when I use to make Ghost Traps from quart sized milked cartons.

Until I grew up physically, Kenner had all my Real Ghostbusters needs covered. Except for kids flight suits. (Ecto-Containment Blog Post, December 21, 2014)

Nearly a decade later I found out Ghostbusters exists on the world wide web, Norm Gagnon coined the term ghosthead, and ghostheads like himself had been making Ghostbusters prop replicas since 1984. (Ecto-Containment Blog Post, April 30, 2016) I still can’t believe I didn’t search for Ghostbusters (thanks a lot AOL) in 1994.

With Halloween 1997 fast approaching I wanted to be a Ghostbusters again. Why start that project in January when around Halloween would seem to suffice. That’s when my best Ghostbusters friend Joe, a ghosthead since childhood found us navy blue coveralls. I think the “I work at a garage” name patches came from a mall kiosk. With zero skills, (I didn’t know that overall at the time) when we were going to follow Norm’s plans, we made packs from thrown together storage containers.

I don’t know if Halloween was the reason or Ghostbusters. The nearby Jersey neighborhoods complimented us. “Successful test.” It was around that time I knew I wanted to start a Ghostbusters group, make a more accurate costume, and perhaps someday have screen accurate or well “close enough” Ghostbusters equipment.

Feeling the type of excitement Peter and Ray could show over a fictional business I opened what I perceived to be the first Ghostbusters group in The Garden State. I was more a field agent as I didn’t know anyone who truly wanted to do what is common place today. I created a “franchise” site, personally recruited by The Ghostbusters themselves. Yes, you read that correctly.

Scott, (sounds about right) a ghosthead, prop builder, and medieval sword maker from PA had built at least 10 of these realistic, though not entirely screen accurate Proton Packs. They were for sale.

That’s what we did on a Summer day, driving to a wooded Pennsylvania property. The barn like workshop had all kinds of prop replicas. A row of replica packs might have been odd. Or was it the other way around? After talking to Scott, we went inside his house where my soon-to-be Proton Pack replica sat on a coffee table. I think.

“The Jersey Packs” are a combination of wood, vacuum formed plastics, metal, real parts. ie: Clippard and are mounted on A.L.I.C.E frames with kidney straps. In 2000 mine had wiring (no sound kit) so the Neutrona Wand and Proton Pack would power up.

In the 21st Century “it was a sign alright” and Ghostbusters NJ was a solid alliance. Activity had “buried the needle.”

The History Of A Rich Proton Pack Pg. 2