Being a The Real Ghostbuster can be an exciting experience. You get to chase imaginary ghosts because of advanced science, which you thought you understood at 8. Using state of the art technology you pretend to catch and trap these ghosts. The entire time, you don’t even get slimed for real, only in your imagination.

Kenner knew The Real Ghostbusters play time was incomplete. They invented their own slime and called it Ecto-Plazm.™ Ecto-Plazm™ (with a z because it’s a cool spelling and goes with my accent) is a slime substance (best we not know what its made from) that came in a Play-Doh container with a new label. I can’t confirm that, considering the cans are the same color and are probably the same size it makes sense. 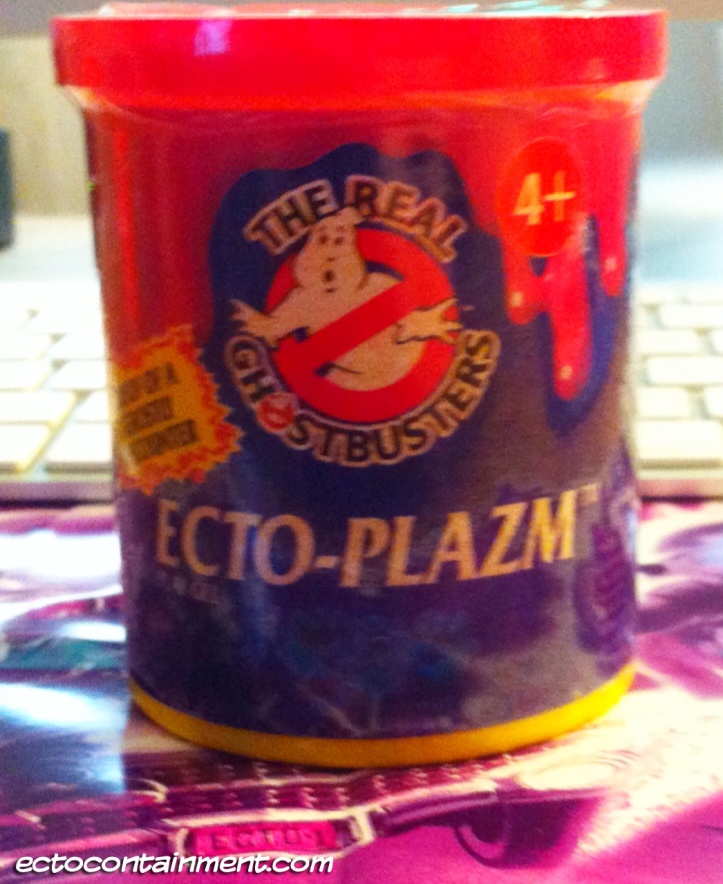 Kenner didn’t create Ecto-Plazm™ so kids could slime themselves. It was originally meant to slime the first series hero figures inside the Firehouse. This was the first The Real Ghostbusters play set that came with a 5oz can of Ecto-Plazm.™ The Firehouse has what are known as “goop grates” located on the roof. With a figure or figures inside you can pour this slime into the goop grates, which will effectively slime a figure or four. I never really knew if Kenner planned for the first hero figures to be compatible with Ecto-Plazm.™ Your parents didn’t want to continue cleaning sticky, wet slime off them. Since it was the 80s and money was a flowing, even your lunch money could buy another figure from Kay-Bee toys.

Knowing The Real Ghostbusters would eventually need to leave their toy HQ, they created four different Gooper Ghosts™ Each of these large ghost toys could hold 5oz of Ecto-Plazm.™ Depending on the figures design a first series hero figure could be covered in Ecto-Plazm.™

How could you continue sliming The Real Ghostbusters figures once these cans were empty? After doing your homework during the week if you were lucky or watching Saturday morning cartoons your mom could take you to the mall while dad relaxed at home. You knew they wanted to go anyway, even if you had to wait just a little longer, you would end up at Kay-Bee (or elsewhere) where Kenner naturally had you covered with more Ecto-Plazm.™

Not only was it legal to buy 5oz Ecto-Plazm,™ Kenner sold it in 4 different colors! The original Ecto-Plazm™ pretty much came in purple. Unfortunate the Gooper Ghosts™ didn’t come with different slime colors. Imagine Squisher™ with orange slime instead of purple. Kids could delight in blue slime, yellow slime, and red slime! A bit surprising Kenner never produced a greenish slime, just like in Ghostbusters.™ Or introduced pink Ecto-Plazm™ in 1989.

If bright color toy slime isn’t enough and because not every kid was going to have a Gooper Ghost each can of color Ecto-Plazm™ came with a small ghost figure.

During the year of Ecto-Plazm™ (1988) Kenner sold three different Mini Ghosts™ which came with either two or three ghost figures. They were strange looking ghosts like The Real Ghostbusters would have most likely seen during a call. One of the Mini Ghosts,™ Mini Goopers® came with a smaller 1.75oz can of red Ecto-Plazm.™

Fact: Outside the United States the same Mini Gooper® figures could have come with blue or yellow Ecto-Plazm.™

Photo Credit: Ecto-Plazm™ box came from an eBay auction and is being used for reference.