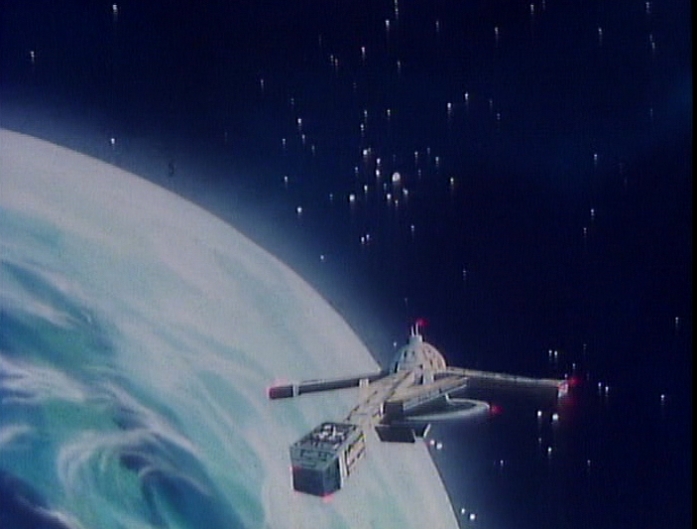 Synopsis:  The Real Ghostbusters are sent to outer space to the space platform Galileo in order to bust a particularly scary creature, while Peter is overjoyed about working under a government contract. 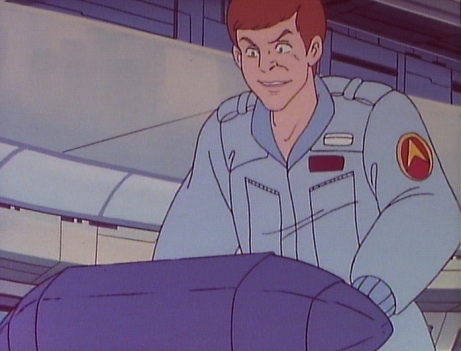 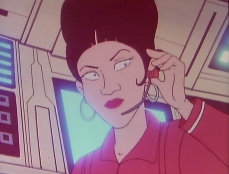 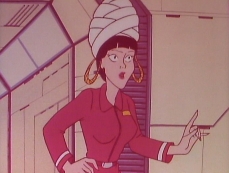 You’ll Need A Reference: During the Middle Ages the superstition surrounding Friday, the 13th may have arisen “originating from the story of Jesus’ last supper and crucifixion.”

It wouldn’t be before the 19th Century where records would indicate both Friday and the number 13 are unlucky together. 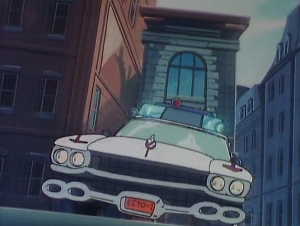 You’ll Need A Reference: Janine and Slimer aren’t in this episode. She probably took the call directly from Captain Ivan Kirov or the administrative body of NASA.

You’ll Need A Reference: National Aeronautics and Space Administration (NASA) is an agency that’s independent of United States government. Some of NASA responsibilities include civilian space programs. As well as research in aeronautics and aerospace.

It Just Popped In There: Unless NASA has an operations center that can also launch a space shuttle in NYC, we can presume The Real Ghostbusters took a flight to either Florida or Texas. Does that mean ECTO-1 is at long term parking at one of New York’s airports? 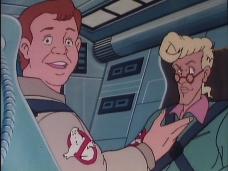 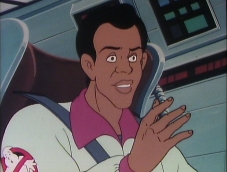 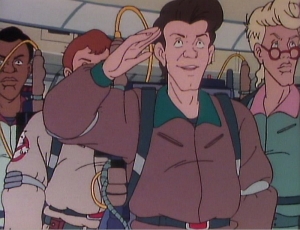 Sorry, I Missed It: Ray’s elbow pad seems smaller then it should be. Maybe the material is being effected by space travel.

You’ll Need A Reference: Peter quotes what Americans associate as being a “mailman” creed. Which states: “Neither snow nor rain nor heat nor gloom of night stays these couriers from the swift completion of their appointed rounds.”

However the United States Postal Service doesn’t have an official creed. The phrase comes from an inscription that resides on the James Farley Post Office in NYC. Its roots can be traced much further back in historical times. For example, ancient Persia.

Quotes: “Do these people look familiar to you?” – Winston

[after speaking with ray, to captain] “Pardon me captain, have we met before?” – Winston

You’ll Need A Reference: The look of platform Galileo, the captain’s log, the delta like symbol on the uniforms, the astronauts looks, personalities, and some quotes are direct references to the 1960s science fiction show, Star Trek. Which was created by Gene Roddenberry.

It originally ran for 3 seasons on NBC from 1966-1969. After running in syndication during the 1970s, its popularity lead to an animated series and its first movie. In the 1980s and early 1990s Star Trek: The Motion Picture was followed by 5 sequels. The Original Series (TOS) popularity would also spin off to ST: TNG in the 1980s, ST: DS9 and ST: Voyager in the 1990s. A prequel show, ST: Enterprise ran for 4 seasons in the early 2000s.

You’ll Need A Reference: The ghost is based on the comic book adaption from John Carpenter’s The Thing From Another World. It also reminds me somewhat of the aliens from Alien(s). Which prior to Ghostbusters starred Sigourney Weaver.

It..Doesn’t Make Sense: Peter, being repulsed by the “space ghost” comments about not putting marshmallows in his coca again. What does one have to do with the other? How many ugly looking ghosts have The Real Ghostbusters seen since they’ve been in business?

You’ll Need A Reference: Harold Ramis, who co-created Ghostbusters and played Egon Spengler based his character on the scientific and logical Star Trek character, Mr. Spock.

It Just Popped In There: Have The Real Ghostbusters called the Neutrona Wands “ion rifles” before? I would have known more as a kid, with my reviews episodes aren’t always watched in order.

You’ll Need A Reference: Wonder Bread, is a brand of bread today made by Flower Foods in the US. The brand has been around since 1921 and was one of the first companies to sell its loaves sliced. Which is how Wonder Bread was advertised beginning in 1930. “The greatest thing since sliced bread!”

On a personal note this was the chosen bread of my 1980s childhood.

You’ll Need A Reference: In Star Trek: The Wrath Of Khan, which came out in 1982 Chekov and his then Captain are captured by Khan. He puts these little creatures in their ears, basically controlling them to do what he wants.

Sorry I Missed It: As Peter is relaying the government fine print, Peter’s eyes are closed until he’s finished. Unless he was thinking.

Its Technical: Egon’s working on a Proton Pack in the background.

It Just Popped In There: Did Egon bring a reserve Proton Pack as they wouldn’t have access to additional equipment from ECTO-1? In case of emergency? After accidentally losing one? All of the above? Where was this spare Proton Pack when they came on board?

Its Technical/It Just Popped In There: Did the creature eat a Proton Pack? Or did it somehow figure out how to produce proton streams, eating them until the pack ran out of power?

Sorry, I Missed It: Somewhere between removing his proton pack and entering the room to communicate with the ghost Winston’s web/pistol belt disappears. 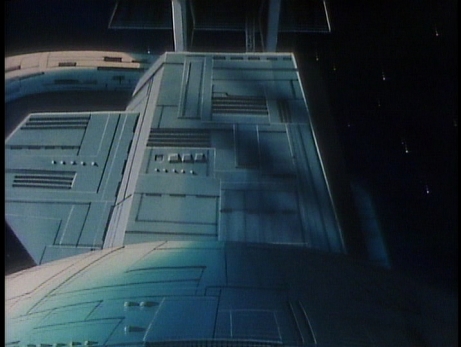 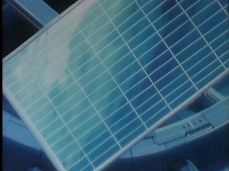 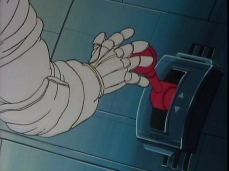 It Just Popped In There: I realize the people who designed and actually built the platform wouldn’t want just anyone at anytime shutting down essential systems. It seems pretty inconvenient to have to wear a space suit, go out into space, make your way down to the open lever, and manually pull it.

It Just Popped In There: With the gravity to that section of the platform turned off, how are the proton beams able to move “smoothly” at the creature in a ‘vacuum’ of space? Is it from the modifications?

It Just Popped In There: Again with the gravity off, how are The Real Ghostbusters able to “drop” Ghost Traps to the floor?

Sorry, I Missed It: With the gravity off, the Ghost Traps float a little after “landing.” 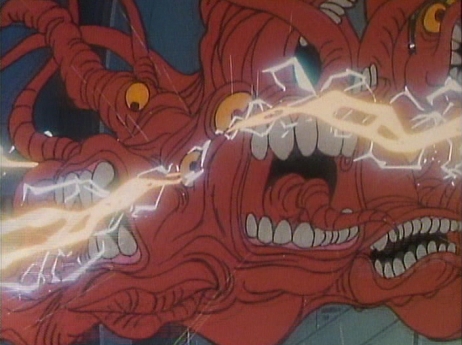 Its Technical: Fortunately the modifications that were made to the equipment, such as the Ghost Traps work like usual. 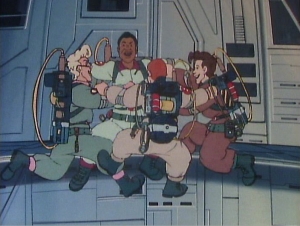 Quote: “Government contracts. I love them. We’ve only just begun to tap the vast financial resources of our great nation.” – Peter

It Just Popped In There: The Real Ghostbusters didn’t wear space suits on the way to Platform Galileo, (as astronauts would do) why put them on for the voyage home? 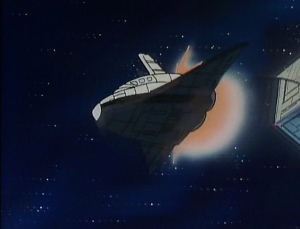