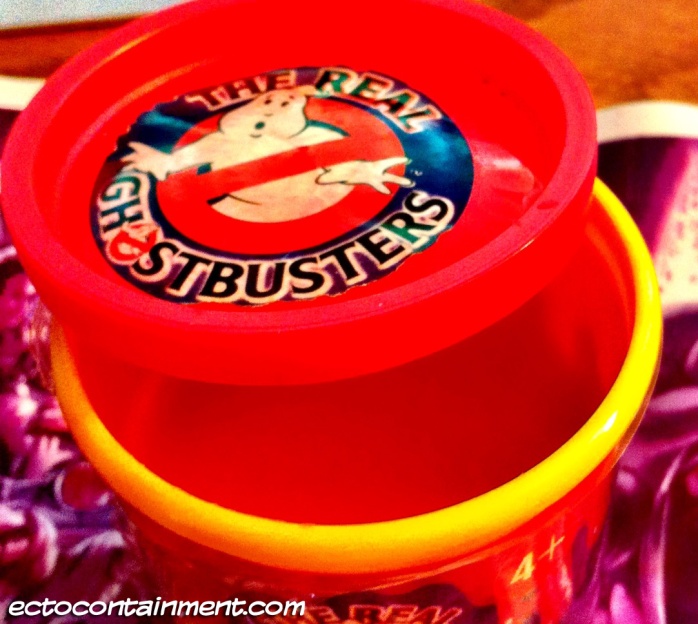 Before I started collecting Kenner The Real Ghostbusters toys again a few years back I hadn’t owned a single can of Ecto-Plazm™ since I was about 10 years old. The idea of slime has been ingrained in me since I first saw Ghostbusters.™ I knew I had to collect a can or eight. Although I can have criteria about how I collect I didn’t necessarily have to own 25 + year old sealed toy slime. I was never concerned about owning the various small ghosts.

When I started buying Ecto-Plazm™ naturally they had been opened and the original purple slime looked like canned cranberry sauce. I certainly didn’t expect a small ghost figure to be included. As a ghosthead and collector I wouldn’t see sealed Ecto-Plazm™ until I bought my Firehouse. Since then a handful of MIB/MOC ghosts have included different sizes of sealed Ecto-Plazm.™ I never intended to open any of them. I decided for nostalgia and the purpose of this article I would break a 25 + year old seal. Most of my sealed Ecto-Plazm™ is purple. I wanted a strong, bright slime. I choose to open the Ecto-Plazm™ that started it all, the can that came with Ghostbusters Central. 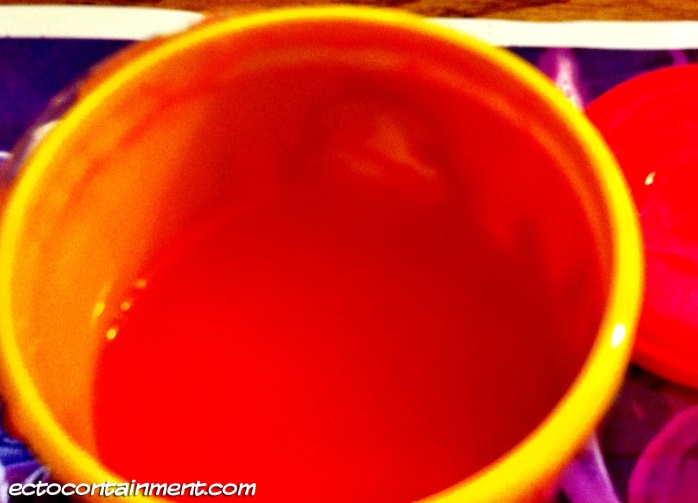 It was as slimey as I remembered. Not surprising 25 + year old Ecto-Plazm,™ sealed or not will evaporate over a couple of decades. Fortunately it hadn’t hardened and I was excited by the possibility of finding the treasure of a small unknown ghost figure. Unlike when I was a kid I wasn’t about to have slime sticking to me and anything valuable on my desk, including a certain smart phone from a fruit company. Like I could have when I was younger I used the small play-mat! 😀 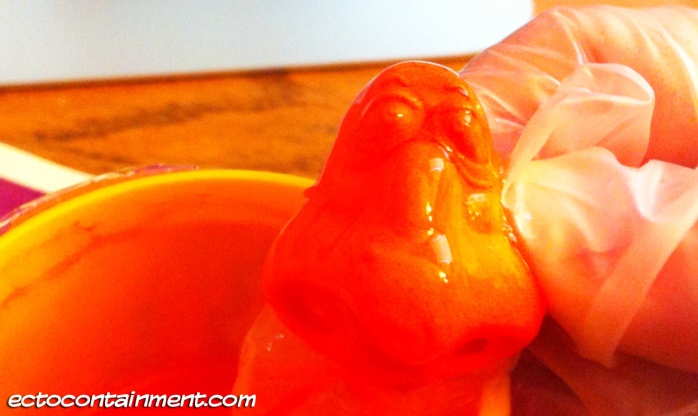 After putting on a medical glove, (I know, my Ghostbusters™ costume gloves would have been more appropriate) I took the ecto-plazmic plunge and found a slimed covered ghost figure! A class 9 Comes To Your Senses had been hiding among the Ecto-Plazm™ all these years. I didn’t have my Proton Pack or Ghost Trap with me at the time. Which may be why the little “powerful” ghost seemed relieved and happy to be out of a Play-Doh container.

I’m not sure how Kenner chose to classify the ghost figures included with different colorful cans of Ecto-Plazm.™ The classification of ghosts did vary drastically from the movies and the cartoons. For example in Ghosts ‘R Us Egon said something about a ghost being more powerful then Gozer. It served its purpose in the episode. Really, a small ghost figure locked away in a can of toy slime would be a class II at best. Even when its whole body is shaped like a nose.

As I can’t have toy ghosts dripping Ecto-Plazm™ all over the office area I washed 25 + year old toy slime away to reveal more of “Comes To Your Senses.” As I haven’t seen one of these Ecto-Plazm™ figures in years I immediately saw how Kenner could be clever with so little. This detailed nose shaped ghost figure with its own nose (wow) is about the size of a child’s nose.

It has large enough holes in its design so a kid could probably breathe through it. These little figures can provide additional play time without costing parents more. Which was good for you because all your favorite cartoons have a lot of toys and you didn’t understand the concept of banking in 1987.