In March 2014 Funko, a collectible toy company announced their Ghostbusters Pop! Movie Vinyl figures were coming for Ghostbusters 30th Anniversary. Previously I wasn’t too familiar with Funko products. When it came to vinyl figures, I knew more about Mighty Muggs from Hasbro. I found out about them for the first time a couple years ago. When I saw Mighty Muggs at US toy retailer Toys ‘R Us and bought two retailer exclusive licensed Marvel Iron Man 2 figures.

What’s the difference in brands? Mighty Muggs are a bigger scale and seem to have decal graphics for clothing, skin, and hair. Pop! Vinyl Figures generally are 4 inches in size, look more realistic, are known for their circular black eyes, their heads can move, more detailed skin, hair, and clothing. Depending on the figure, will come with its known accessory that isn’t removable.

Both companies did or do share similar licenses that include characters from Marvel, DC, and Disneyfor starters. Pops! are meant to be collectible and continue with licenses for classic and more recent television shows. Of course movies too from back in what I like to call the day to present.

Not surprising I’ve liked these figures almost immediately. They’re the vinyl figures I would have wanted from the beginning and didn’t even know I needed. When they became available closer to the end of April I was getting ready for vacation. Between travel expenses and things like bills I knew I’d have to wait until June. With the LEGO Ecto-1 Ghostbusters set coming out, at the time I felt I’d have an easier time finding the Pop! figures during the summer.

Near the end of July while on a trip to the nearest Barnes & Noble (one of two national chains, the other being Hot Topic that I know of that carries Funko Pop! vinyl figures) they had Dr. Venkman, (104) Dr. Stantz, (105) and Egon. (106) Slimer and a different size Pop! would come from Amazon first week of August.

Pop! Dr. Venkman was unavailable as he was looking for a non existent Dana as Gatekeeper Pop! Pop! Dr. Ray was more then happy to help a ghosthead and collector out.😉 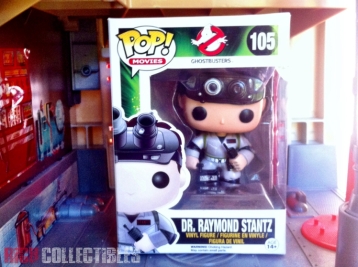 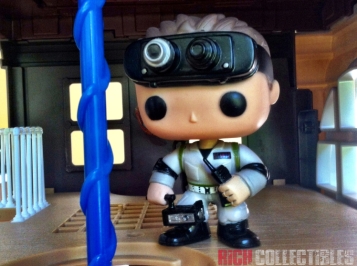 Funko Pop! boxes with the collectible figures are cool, the details are easily missed. As these aren’t classic collectibles, I’ve taken them out of their boxes for a closer look.

Each Pop! Ghostbuster has a detailed uniform with their name patch and even a web/pistol belt! Most of the real elbow pads (really Volleyball knee pads) are gray, its not a big deal these were painted black. As Ray’s Ecto-Goggles are that military green color, I’m not sure why Funko didn’t go the extra quarter mile. Even without the green paint, the goggles are detailed, which make for a nice touch. Where applicable each Pop! Ghostbuster has the “accessories” or equipment they’re known for, along with a Proton Pack. We’ll take a closer look at a Funko Proton Pack with Pop! Egon.

As Dan Aykroyd loved everything, his figures wouldn’t have enough room or hands.🙂 Ray is holding a “walkie-talkie”and Ghost Trap. I believe this is representative of the hotel Sedgewick hallway scene where Ray is talking to Peter about Slimer. The Ghost Trap also has some nice details, similar to the elbow pads. The only nitpick here is the “caution” part of the trap doors aren’t painted yellow. If one really wanted to with some work the inaccuracies could be fixed. 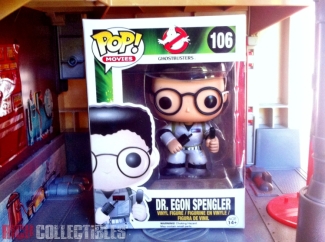 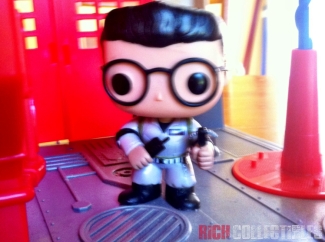 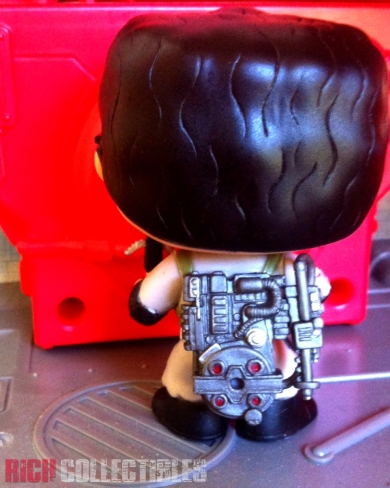 You would think with bug eyes, no Pop! figure would need glasses. It wouldn’t be Egon without prescription lenses. I understand why Funko didn’t or wouldn’t, could have been cool to see the glasses with what else, vinyl lenses. Ziggy’s glasses even extend to the ear pieces. A nice detailed touch.

Of course Egon comes with a “working” P.K.E Meter along with a “walkie-talkie.” Like he was listening to Pop! Ray about Pop! Peter getting slimed in the same Sedgewick hallway.

Here’s the originally surprising Pop! Proton Pack. I hadn’t seen them until ghostheads were posting pictures and collectors were reviewing the Pop! Ghostbusters. With as many details as a real Proton Pack has, Funko did go beyond and above to include pretty much every one. The only part that seems missing is the shock mount. Its the “part” of the Proton Pack that holds the bumper to the cyclotron. I think like the ion arm at the top (a protruding part on the real packs) Funko didn’t want pieces to stick out if possible.

One would have to be the kind of ghosthead that really cares about it to continue noticing or a kind of fan who builds replicas.

A bit unfortunate, the Nutrona Wand isn’t removable. Maybe if Funko had decided to let the Pop! figures freely hold applicable objects. It isn’t like I’m asking for Pop! figures to pick up and hold foreign rocks. I understand the choice they made. 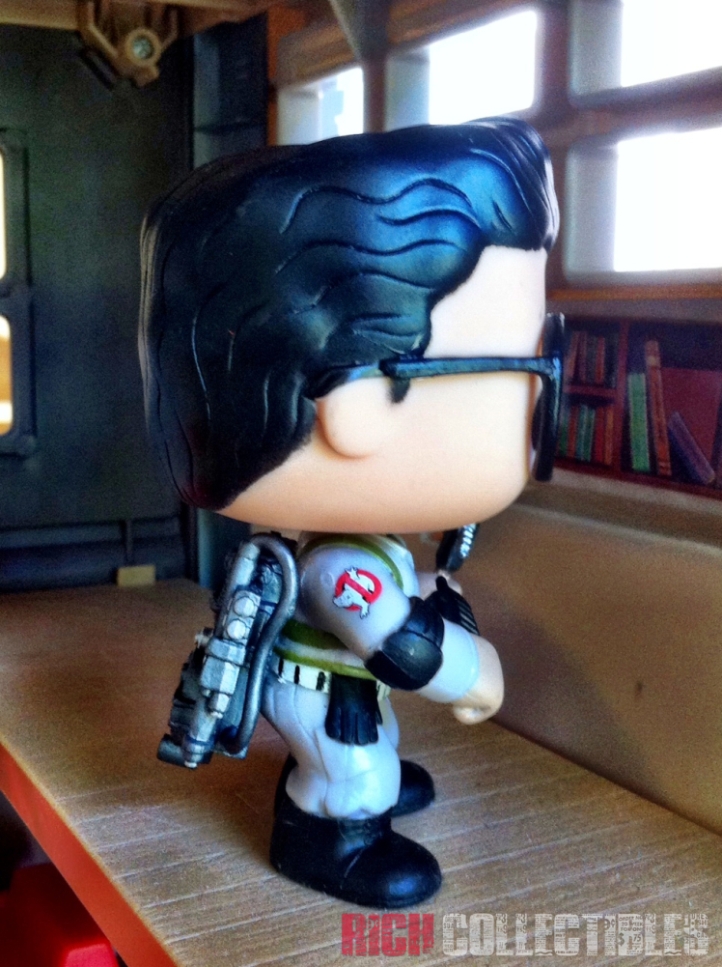 Further details with the uniform even show the chemical gloves! While this picture could have been artistic as well, I took it more to show off the mistake of the sideways “no ghost” logo. I really can’t picture a factory worker just applying a lot of Ghostbusters “no ghost logo” stickers to the arms. However, whether it was a machine or a person, my Egon Pop! has a sideways patch. I even double checked Pop! Ray after I had put the figure back in the box. That one was fine. I don’t know if the “error” is common or makes mine more rare. If these do become valuable in a financial sense, I guess I could know within 30 years.

If you were wondering Egon is about to get a copy of Spates Catalog. 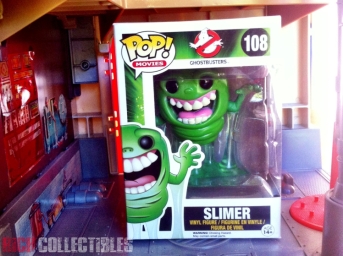 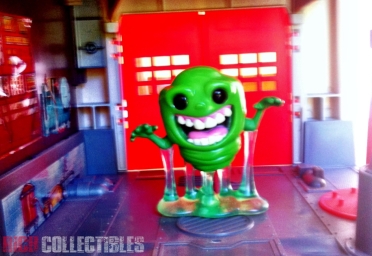 Slimer naturally is the first non human Ghostbuster Pop! figure. He’s been hanging around a The Real Ghostbusters Firehouse for years. Sure, sometimes Pop! Ghostbusters trap him, not for very long.

The original idea for Slimer is that it would be odorous like an onion, hence its original name Onionhead. During the filming of Ghostbusters even though it was inferred Slimer smelled, the green ghost was called a spud. It always kinda had a potato shape. Funko’s Pop! Slimer is no exception. The pose is just right and the details are excellent.

Pop! Slimer has the pose (as first seen at the Sedgewick) that he’s sizing Pop! Peter up and it’s going to fly at Pop! Peter and leave ectoplasmic residue (slime) behind! Since Slimer in this un-life time doesn’t have legs, Funko added dripping slime with a puddle of slime for a base to hold it upright.

The eyes are more glassy as they’re embedded, the teeth and tongue are done very well, reminiscent of Kenner’s Green Ghost, “known as Slimer on the TV series The Real Ghostbusters.” Except Pop! Slimer has the benefit of a Ghostbusters health plan.

If you think the Pop! figure most likely to eat sweets is nice, wait until you see a 6 foot Pop! marshmallow man.