Back at February’s New York Toy Fair Ghostbusters licensee PPW Toys had their upcoming Ghostbusters Mr. Potato Heads and nesting dolls on display. (GBI Blog Post, February 14, 2016) Not that surprising I wasn’t familiar enough with PPW Toys. Checking out their site gave me a better idea of their partnerships and pricing.

Today PPW Toys has given us a better look at their Ghostbusters products. Let’s take a closer look! 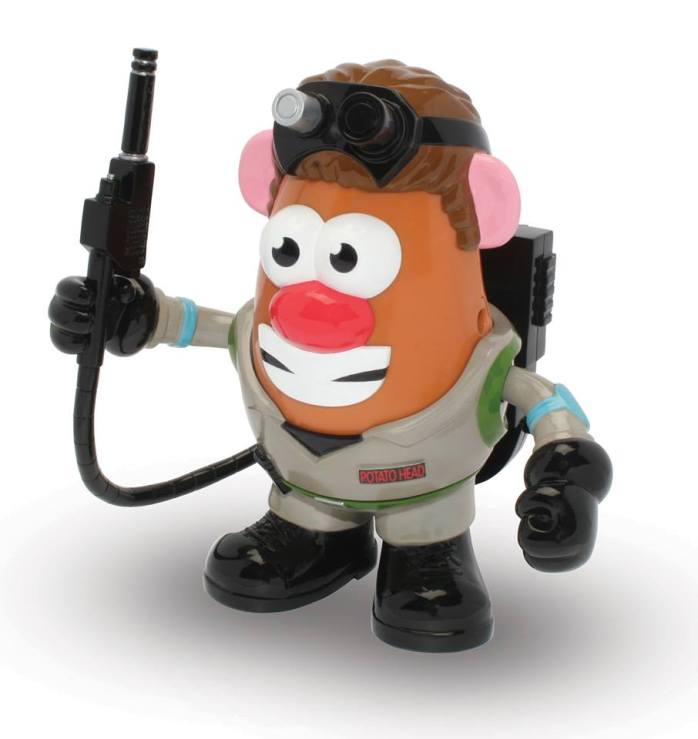 Through the years Mr. Potato Head was pretty much whatever he wanted to be. Eventually he decided to become a Ghostbuster. You can’t be a Ghostbuster without equipment. PPW Toys could have just given it a pair of Ecto-Goggles. No, as ghostheads we’re better then that. Can’t wrangle ghosts in without a Proton Pack. He even has a Potato Head name patch. Mr. Potato Head is ready for business!

Ghostbuster Mr. Potato Head – Who you gonna call? Mr. Potato Head suits up and joins everyone’s favorite para-psychologists; the Ghostbusters! This detailed PopTater stands 6″ tall and includes equipment used by the Ghostbusters: the classic Jump Suit, Proton Pack, ECTO Goggles and more! And each component is removable and interchangeable. Our PopTater collectibles look great on display and come packaged in their own box to truly showcase each figure.

Ghostheads can decide for themselves if a Mr. Potato Head decided to cosplay as Stay-Puft or in the potato city universe where potato people live, did the Mr. Potato Head Ghostbusters conjure up a 6″ Stay-Puft Potato Head? I’d like to think both are plausible. Imagine a Potato Head Gozer or even Terror Dogs! Are you listening PPW Toys?

I know nesting dolls are collectible. I never quite understood them or the need to own any. I might need to make an exception for ones that are Ghostbusters themed. Even though this isn’t personal from PPW Toys to Ernie Hudson, I’m sorry his nesting doll had to be almost the smallest. On a bright side Bill Murray’s isn’t the largest. 😉

Ghostbuster Nesting Dolls – The world’s greatest Para-Psychologists are now available in this collectible Nesting Doll set. Each set includes six plastic dolls that stack inside each other measuring from 2″ to 4.5″ tall. All four classic Ghostbusters are here; Venkman, Stantz, Spengler and Zeddemore. This special set also includes the giant Stay Puft Marshmallow Man, and a bonus transparent Slimer piece.