Last month around this time (almost to the day) after posting about Party Time RGBs plates I came across another The Real Ghostbusters party plate. This plate (with party invitation!) was produced by C.A. Reed. It features The Real Ghostbusters in an action pose, seems like artwork that was used on other products. What are they so afraid of?

Could it be friendly STAY-PUFT MARSHMALLOW MAN? Or is he? 😀 What did you do C.A. Reed? We know RGBs Mr. Stay-Puft rarely showed a negative emotion. Maybe The Real Ghostbusters aren’t sure, so they’re reacting accordingly. Also, what’s with Slimer, why is he scared?

He’s a ghost that lives with humans who study and catch ghosts. He’s well protected. And Slimer is friends with Stay-Puft. Stay-Puft is his buddy, he was “the big guy” (think Peter gave him that name nickname) long before Ryback. 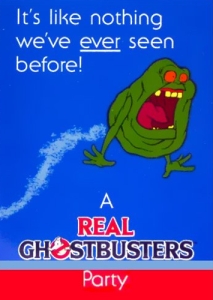 Stay-Puft smiles, holding out his oversize marshmallow hand. Maybe he’s here for a party or to prepare for one by accepting an invitation. C.A Reed was making a bold proclamation that they’ve never seen anything like this before. I didn’t quote it exactly because it would have been grammatically incorrect.

Also while searching for something else Ghostbusters related, I came across these related Stay-Puft Party  decor. Which had me imagining a more complete Stay Puft The Real Ghostbusters party. With bold Slimer invites sent and the big day arrives, time to decorate the table.

I can imagine C.A Reed made a similar paper like table cloth. I don’t know about streamers, I’m getting creative. With the printed table cloth and plates set, a Stay-Puft party is incomplete without Mr. Stay-Puft party hats! Not shown here, I’d imagine it had the standard thin elastic which I guess was suppose to rest under your chin. It was never that comfortable. Yeah, it could have looked silly, shoe laces would have been preferable. Set out the printed not very kid friendly napkins, (and cups, also not pictured here) and we’re almost there.

Our parents were hoping we forgot all about those noisemakers we made them buy. You know they didn’t want a room full of kids repeatedly making horn like noises. Along with the soon to be annoying curly part which will hit a kid in the head or eye. That can bring the a party to a halt real quick.

C.A. Reed called their versions ‘blowouts’ which functionally is correct. As far as I’ve known, these items are noise makers. They could have a more patented name or maybe not.