In the past a company or two (Ecto-Containment Blog Post, October 13, 2015) made Ghostbusters candy, if you lived in the United Kingdom. What about the 327.2 million (as of 2018) US residents? Everyone loves Ghostbusters and candy.

I patiently waited (sure) and during Ghostbusters 35th anniversary Astor Chocolate produced not 1, but 2 Ghostbusters candy bars.

It’s been 5 years now. I don’t get why Sony can’t provide a chocolate company new stock art. Maybe for a limited product, it’s easier. Someone somewhere had to design the “rest” of the artwork. Which for the record (what record?) I really like.

Both of these classy chocolate bars were made as an FYE exclusive. In looking up the website for Astor Chocolate I didn’t see one mention of Ghostbusters.

I’ve had both of these chocolate bars since last month. I hadn’t opened them until today. Both are bigger, fancier versions of a Hershey’s milk chocolate bar. I was hoping to see Slimer and respectively Stay Puft logos on the chocolate. I feel Astor Chocolate probably wasn’t going to stop making all their other products to make fan driven perfect Ghostbusters candy bars.

I also noticed with the Stay-Puft version a piece had broken. It didn’t feel that way when it was sealed. I don’t think it was that way when I bought them at FYE. It could have easily happened in bringing back to Ecto-Containment HQ or moving them around the kitchen at times. 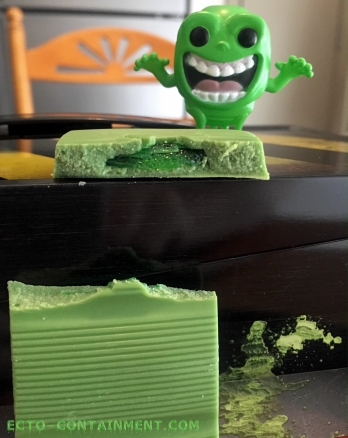 Maybe it’s the dyed green chocolate or the filling, the little I’ve tried had a mint taste to it. I usually don’t eat candies with filling in them. I like it, I don’t love it. Fortunately it’s a $2.99 buy.

The toasted marshmallow filling brings back memories from Camp Waconda or that one time the Ghostbusters roasted a 100 foot marshmallow man. Milk chocolate and artificially melted *I guess* marshmallow is preferred to mint gel like food coloring.

Would I Buy Again?