In 1985 Ralston brought us Ghostbusters cereal. (Ecto-Containment Blog Post, October 8, 2014) In 1990 after the Ghostbusters franchise went into a type of slumber, (also personally know to me as “the dark times”) our beloved cereal had disappeared.

Ghostbusters and its fandom would grow, anniversaries would see new merchandise, including things we could eat (GBI Blog Post, February 21, 2016) and drink. (Ecto-Containment Blog Post, June 17, 2016) Sure, Twinkies are snack food. It isn’t breakfast. When would ghostheads be able to have not expired and inexpensive Ghostbusters cereal again?

Enter toy (and cereal maker?) company Funko. In 2018 the Pops! company whom had already made plenty of Ghostbusters figures, (Ecto-Containment Blog Post, December 28, 2014) began producing Funko’s. Cereals based on licensed properties which probably already had a Pop! figure or 22.

The one Funko’s cereal that was missing, Ghostbusters. During a sorta off Ghostbusters anniversary, ghostheads had to maybe eat strange waffles instead.

What a difference a year makes. In 2019 Ghostbusters turned thirty five and decided it had a lot to do for this year and next year. To start a new day off right, it’s time for Funko’s. Ghostbusters. Slimer. Cereal! 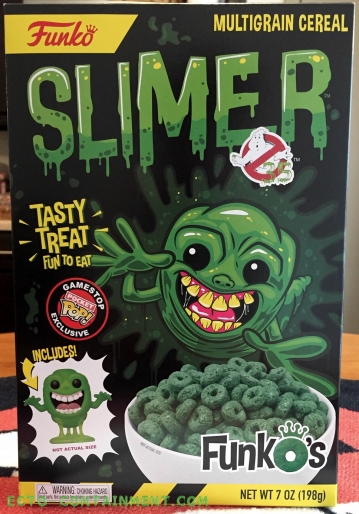 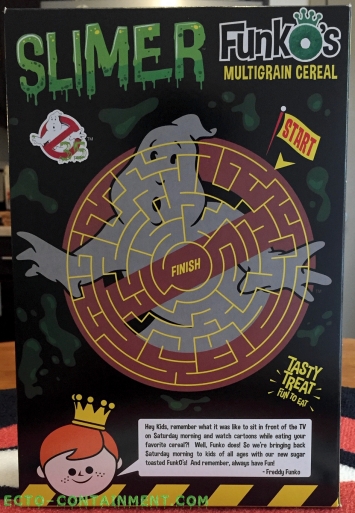 Funko, (like everyone else since 1986) knew if they were going to make a Ghostbusters cereal, it had to be based around Slimer. I get it, for a life long ghosthead wouldn’t Pop! Ghostbusters cereal be even better? What Funko actually made is pretty sweet.

Admittedly as an adult I bought Funko’s more for the box art then the cereal. If you ate any number of kids cereals mostly 35 years ago, these boxes should bring back breakfast nostalgia. Funko did more than a nice job with its classic like look and reminding us of “better times.” You can’t please every ghosthead, including me.

I’d like to think of myself as a creative type. I once wanted to be a professional graphic artist. My nitpick is minor and is only said because Ghostbusters has meant so much to me since 1984.

On the side of the box, I would have liked if Funko had used the original Ghostbusters “no ghost” logo where “no Slimer” is. Then they could have put that logo or the 35th “no ghost” logo in the “o” in Funko’s. 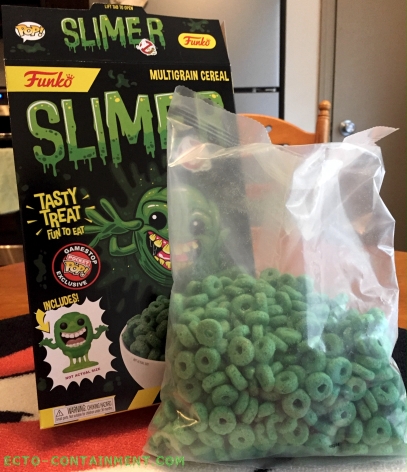 Funko has us “right in the feels,” but what really is Ghostbusters cereal? Can a 41 year old ghosthead really enjoy it?

All Funko’s (best I know) are circular shapes in various colors to match its accompanying property. Visually they remind me of Fruit Loops and in Ghostbusters (Slimer) cereal case, more like Apple Jacks. I’ve had neither in years and haven’t had kid cereals of yesteryear since well 1980 something. This was going to be a little different.

Ghostbusters (Slimer) cereal came out in May 2019 as a GameStop exclusive. I bought a box last month, where it sat atop of my fridge, sometimes while it was pretty hot outside. Occasionally 80 something degrees at Ecto-Containment HQ.

While preparing for this post, I noticed the cereal had stuck together. I was easily able to separate the mega “slime like” cereal. Probably the sweetness of any sugary cereal. Once I opened the bag I tried some without milk. It is sweet, probably the sugar? Sounds strange, had a hint of lime like flavor. I’m not one to eat either lemons or limes.

This morning I had a little more with milk. Their wasn’t enough milk in a small bowl for the cereal to get soggy, maybe become more flavorful, or see as I’ve been wondering would the milk turn green. The flavor remained the same. I will have some Funko’s Ghostbusters cereal again. I don’t foresee finishing the box. 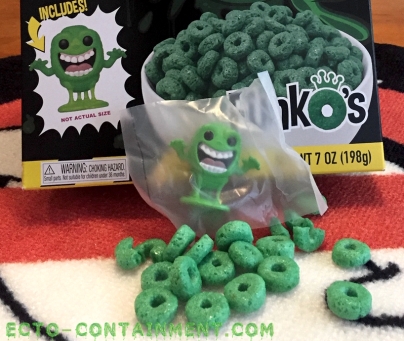 Did kids and a 41 year old really eat any kid cereal for the cereal? Well maybe. It was the “cheap” toy inside at the bottom of the box we really wanted. Funko’s didn’t disappoint.

Ghostbusters (Slimer) cereal comes with a Slimer Pocket Pop! This pocket sized Funko styled Slimer is thankfully at the bottom of the box and not inside a bag of stuck together cereal.

Taking a small Slimer out of a cereal box didn’t quite invoke the feelings of being 6 at breakfast time. As an adult having a collectible toy did add extra value to a collectible cereal that costs more than cereals at the grocery store you go to the most.

This Pocket Pop! Slimer totally reminds me of the “cheap” cereal toys companies dropped into cereal boxes thirty five years ago. Without actually being made like adults gave no thought to how children would feel. I hadn’t owned any previous Pocket Pops! before Funko’s. This little Slimer is made very well and reminds me of its original Funko version. (Ecto-Containment image) Going back into my nostalgic memories, these are the kinds of cereal toys I would have wanted to play with.

Slimer Funko’s isn’t the only Funko Ghostbusters cereal in 2019. I’ll be writing about the marshmallow kind (Ecto-Containment Blog Post, July 16, 2019) when it isn’t lunch time.