On June 24, 2014 Funko revealed (GBI) the upcoming SDCC Pop! Movies Ghostbusters exclusives. Immediately I knew I wanted one above all.

A Funko Pop! Movies Ghostbusters 4 pack? With the guys covered in marshmallow? Yes please.😀 As I wasn’t going to SDCC, getting this at face value (not its limited edition, its hot right now value) wasn’t going to be easy. As is usually the case I saw these on eBay well near and over $100 USD.

I had been looking for what was a previous exclusive variant of Funko’s Pop! Movie Stay-Puft, found at then US retailer Hot Topic. They too were going for varying prices from on-line retailers to eBay sellers. During a search I came across Fugitive Toys. I hadn’t previously heard of them. I hadn’t really collected vinyl figures and since that’s their toy business, made sense.

I don’t remember if Fugitive Toys had already sold out of the variant Funko Stay-Puft, other SDCC exclusives which included their red “angry” Pop! Stay-Puft. I believe by this time I had the SDCC Funko Pop! Movies “slimed” Dr. Venkman and Slimer on order from another site, which later had to refund my purchase basically because of supply and demand. As this was available much to my surprise and for so much less then I’d have to pay elsewhere oh yes it would be mine.🙂

I think Fugitive Toys is a California based company. I live just to the right of California, 2,895 miles. I don’t remember what shipping method was used. I didn’t have a single issue with tracking, delivery, or how my limited edition Ghostbusters Pops! were packaged. I don’t know why they’re fugitives, if they ever need to leave California, their could be a retail location in a room nearby. :p

I’m not sure if this was coincidental or I’m seeing things. Did Funko choose to give both Funko Pop! Movies Ray and Egon heart shaped melted marshmallow spots? Well Ray is the “heart of the Ghostbusters.” It does seem cute and wouldn’t look right with Matty Collector’s Ghostbusters figures. 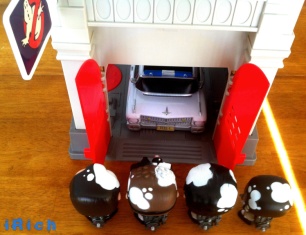 I took these pictures not so much to show off the top and back. I wanted to pay homage to The Real Ghostbusters season 1 episode Citizen Ghost.

In doing so I noticed Pop! Ray’s proton pack was “on.” If Funko wanted to be more accurate, they could have added “melted marshmallow” to the packs. Its a nitpicky detail, one that isn’t noticeable when the vinyl figures are almost always kept in their “exclusive” box.

Next time I talk about a Funko Pop! Movies Ghostbusters, we’ll do so from Camp Waconda later in the evening.