Lego Dimensions (US) Ghostbusters level pack is available now. If being a Ghostbusters Lego game of sorts isn’t enough reason to want to add this your LEGO Dimensions game, the great people behind the games were nice enough to send me an email.

The Ghostbusters level pack features “A Spook Central Adventure!” a mission-based Ghostbusters level where players must fight Gozer and save New York City, and comes with minifigures of Peter Venkman, Ghost Trap, and the Ecto-1! Additional packs also released today include the DC Comics team pack, featuring The Joker and Harley Quinn with two new vehicles, and new fun packs from Doctor Who, Back to the Future and LEGO Ninjago. 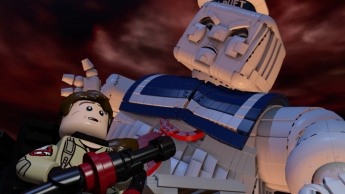 Ghostbusters fans who want to spookify their LEGO Dimensions experience beyond the Ghostbusters level in the LEGO Dimensions Starter Pack can add the Ghostbusters Level Pack which includes “A Spook Central Adventure!” a mission-based Ghostbusters level where players must fight Gozer and save New York City. The pack comes with a buildable Peter Venkman LEGO minifigure and Proton Pack, Ecto-1 and Ghost Trap – all playable in the game. Players can use the misfit parapsychologist’s Laser Deflector, Suspend Ghosts, and Hazard Protection abilities to solve puzzles and overpower enemies. They can also boost their gameplay with the Ecto-1 which can be rebuilt into the Ecto-1 Blaster and Ecto-1 Water Diver and the Ghost Trap which rebuilds into the Ghost Stun ‘n Trap and Proton Zapper. The pack also allows access to the Ghostbusters Adventure World where gamers can play as one of the four Ghostbusters. Players can replay through the game and other levels to trap ghosts and access more collectibles in their journey to save the LEGO multiverse.

If you’d like a preview and see a type of walk through Jason from Ghostbusters News made a couple of videos.

Lego Dimensions Ghostbusters level pack can be found in brick and mortar stores that sell games and on-line retailers for about $30 USD.