As a quick aside I would have written about them sooner if it hadn’t been for personal obligations wondering if we would need multiple mortgages.

Let’s take a look at these exclusive variants. 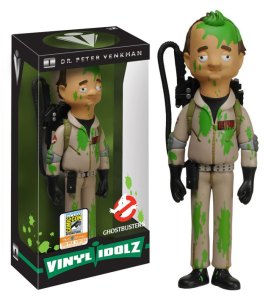 Dr. Raymond Stantz, of course played by Dan Aykroyd pretty much loved everything Ghostbusters as he basically invented it. In Ghostbusters once Gozer was sent back to whatever dimension it was from, by proxy Stay-Puft became globs (gallons? bushels?) of marshmallows. Ray Stantz was practically covered head to toe in the stuff.

I said this last year, problem is any marshmallow variant of a Ray Stantz figure would practically be “covered” in white. Splotches on both this Vinyl Idolz figure and packaging is a necessary, yet decent compromise. Is it worth double, triple the retail value of a regular Dr. Raymond Stantz Vinyl Idolz? That’s up to a collector to decide.

Dr. Egon Spengler once felt like a floor of taxi cab. All because he had a radical idea. Harold Ramis, similar to Dan Aykroyd was also covered in a lot of marshmallow. For the SDCC exclusive Vinyl Sugar used a different paint scheme for the melted marshmallow pattern. The splotches on the packaging are the same, which makes sense.