Early on when Funko was beginning to show (GBI) their Pop! Movies Ghostbusters figures, their wasn’t a pic to be found of Winston Zeddemore. Before Funko could receive an on-line petition ghostheads were assured Winston was to come with an Ecto-1 Pop Ride. While Pop! Movies Winston deserves a company car, fans really should have been able to buy a Pop! Movies Winston Zeddemore from the start. In the later half of Ghostbusters, he does drive ECTO-1 (at least once) and he’d often drive ECTO-1 during The Real Ghostbusters. He wasn’t the only Ghostbuster to do so. 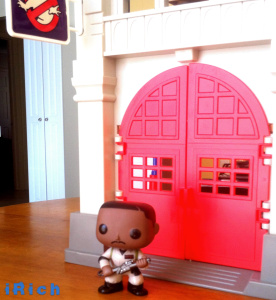 Winston’s original character included military training and other bad ass skills. He was overqualified to work for ghost janitors as get this a security guard. Considering what was to come from the government, naturally having security wouldn’t have been a bad idea. Winston saw a help wanted ad in a paper and went to my kitchen, I mean 14. N. Moore St.

Janine, Ghostbusters first hiree (still waiting Funko) was rather busy answering and holding calls while most likely getting tired of reading the same paranormal questions over and over. Winston like anyone else wanted a steady pay check and as the timing for movie making was right on the mark, a tired Ray hired him immediately. Where Winston got to handle his first two Ghost Traps. Little did he know within three weeks the world could be ending and he was going to get arrested. 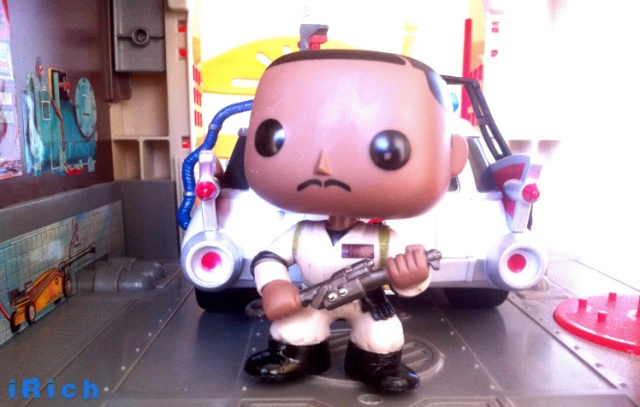 When I opened my Funko Pop! Rides ECTO-1, I first removed this Funko Pop! Movies Winston Zeddemore. It had been months since I saw pics of this figure. Something seemed off about it. If it was mentioned by other ghostheads and collectors “sorry, I missed it.” Funko seemed to make this odd choice to make Pop! Winston’s head smaller in scale compared to its Pop! colleagues. I don’t know the exact reason and without asking my educated guess has to do with scale to the Pop! Rides ECTO-1. When I tried it with a Pop! Ray Stantz, I don’t think it would have mattered. When Pop! Winston is standing with the other Pop! Ghostbusters it can be noticeable and makes Pop! Winston seem younger.

Funko was able to bring out Winston/Ernie Hudson’s personality in the character’s Pop! with the hair style and mustache. Pop! Winston uses the same detailed body sculpt as Pop! Movies Peter Venkman.

With mine their is a paint flaw with an eye. Unfortunately possibly because of shipping their are some light scratches on the head sculpt. Maybe Funko hadn’t considered securing Winston further within the overall packaging.

At least Pop! Movies Winston got to ride in a classic Pop! Rides ECTO-1 the whole time.