How I Got Back Into Wrestling

My 1980s wrestling memories (Ecto-Containment Blog Post, July 10, 2018) seem to consist of me watching WWF and WCW shows with my dad while falling asleep. I didn’t watch either promotion regularly and as I was growing up, I moved away from it all together.

Interest may have waned as I was finding other things to like more along with real life priorities. And if my dad wasn’t watching, pro wrestling wouldn’t have been important. I also grew up and felt childhood was over on November 4, 1989. I wrote more about life events (warning: heavy emotions) around my Ghostbusters II memories. (Ecto-Containment Page)

In either 1992 or 1993 around other personal events I’d prefer not to get into now I was thinking I’ll watch some current wrestling. I couldn’t tell you the exact date, it was a weekend.

As an aside because you need to know: Back then I was about 5 years into having my own Sharp 13 inch television. It originally had rabbit ears kids, eventually my parents allowed me to have a cable box.

Outside of WCW Saturday Night, most weekend wrestling shows on TV were syndicated. I was “flipping” around and most likely came across WCW Worldwide. Which if I remember aired on channel 9 (WWOR-TV) in New Jersey. I didn’t know the look of WCW show(s) at the time, who would have been the active wrestlers, or any storylines. I remember the feel of 1980s WWF. What was I beginning to see? Some wrestler (honestly I don’t know who it was, famous or not) coming through a stage/entrance set. Their were lasers I think. Or might have been colorful lighting. I was out before the guy ever got to the ring.

That was it, I wouldn’t watch wrestling again until 1997. 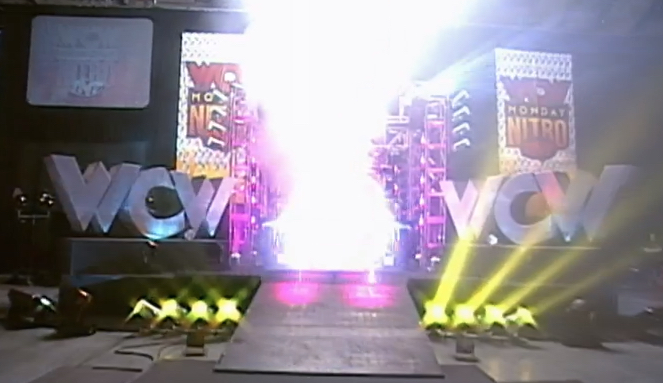 What made me give professional wrestling a real second chance? I was in high school when arguably WCW and WWF were improving. In hindsight I don’t think anybodys “sports entertainment” fandom was being shown. This was before wrestling t-shirts had to be banned. I graduated in June 1996, actually a couple of weeks before wrestling history was to be made. I didn’t know enough about WCW or WWF at that time. It wouldn’t have mattered. Real life. After graduation I was an adult basically. I had a summer trip to California to look forward to. I was continuing to prepare for college. I needed a used car. Anyway.

I had known my friend Joe since 1994. He and I shared enough interests to be friends forever. He has a younger brother who loves (still does) pro wrestling. Joe, like a lot of fans when wrestling was hot watched both WWF Raw (Is War) and WCW Nitro. We’d talk about wrestling, I hadn’t watched anything since whatever had happened on Worldwide. Because it’s Hulk Hogan I knew he had become a bad guy.

“The third man,” a founding member of the New World Order. The reveal with a long promo that happened at Bash At The Beach 1996. That at one time was a big deal. What about all the Hulkamaniacs? I was 19 years old, I was going to be ok. When I would finally see that match and turn, it was a “wow moment.”

On Monday, June 23, 1997 during both shows Joe or I would call each other. It might have been about Hollywood Hulk Hogan. Knowing Joe we were probably having fun or making fun of a promo. I decided to put it on so I could see what the “Hollywood Hogan” character was about. It didn’t take long to get into the nWo. During the best years of 1990s wrestling I was in. In the pre DVR and cloud days I sorta had to choose one. I didn’t entirely have something against WWF. I’d mostly watch WCW. If the nWo had been a WWF stable, I would have watched WWF more. I even remember a time (as an adult) I questioned why my dad was watching Raw when Nitro was on. I was pretty loyal even as WCW was falling.

I’d watch live, even record Nitro. Maybe Thunder. I didn’t really take notice of WWF Raw until Eddie Guerrero, Dean Malenko, Perry Saturn, and Chris Benoit left WCW for WWF in January 2000. I had been a fan of Chris Jericho, didn’t follow his WWF “jump” until Y2K was over.

By February 2000 I could or was watching Nitro, Raw, Thunder, and Smackdown. I feel I didn’t watch the secondary shows as much. If you’re wondering about ECW I never really had access to ECW until they were on TNN. By then I couldn’t or didn’t have the time to watch a third wrestling promotion.

When the fateful night arrived for World Championship Wrestling (March 26, 2001) to be owned by WWF, I watched the final historic Monday Nitro as both shows were becoming one. It was the end of one promotion (or was it?) and the beginning of a new era.