Toy Ark was in attendance to take photos. Let’s take a look at a 1/4 scale Peter Venkman. 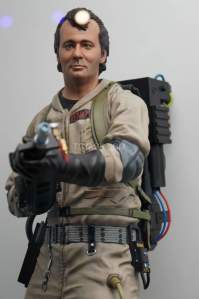 Hollywood Collectibles Group must have gotten in Doc Brown’s time machine, (“you built a time machine out of a DeLorean?”) went back 30 + years, convinced Bill Murray to assist in a future collectible figure, and then when they were finished left for 2015. 😀

With the scale and detail this feels like a Hot Toys or Sideshow Collectible figures. I don’t own any high end statues from either company. I can only go by photos I’ve seen on-line.

If you were wondering what about Stantz, Spengler, and Zeddemore? Ghosthead Alcides Torres sent HCG a message on-line and this is their response:

We have HUGE plans with the Ghostbusters line. We are not just stopping with one statue.

Hopefully “huge plans” means three more statues along with prop replicas, possibly ECTO-1, and smaller prop collectibles. All depending on the terms of the license.

While we don’t have an exact date or price on this 1/4 scale Peter Venkman statue, comparing to other 1/4 scale statues on Hollywood Collectibles Group site its safe to estimate $300 USD.