If I didn’t have to be responsible I might have or would try to buy or bid on some of the ECTO-1 production art. That doesn’t mean I couldn’t share the not always seen art with ghostheads and plug the seller(s) auctions. Hopefully the favor will be returned by someone when I’m selling again.

I’ve cropped the art some because of the seller’s background and cleaned up the art to make it more newer. The actual art has aged like paper does. 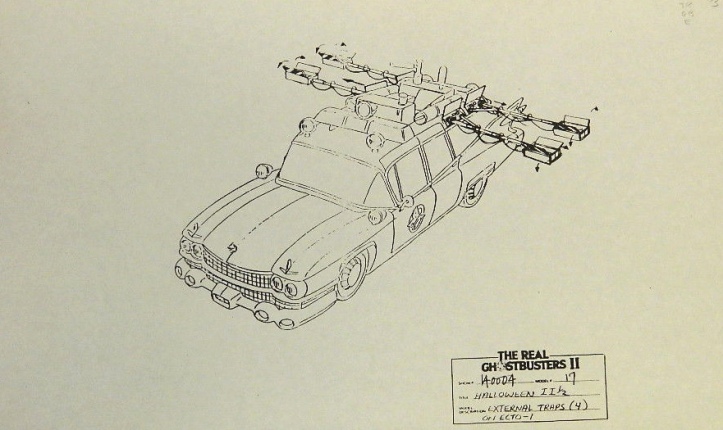 I still can remember when I first saw Ghost Traps coming out from the sides of ECTO-1. Its clever and makes sense. Although Ecto-Containment’s ECTO-1 features page is real light on content I always liked that as The Real Ghostbusters is a cartoon, ECTO-1 could have more tech depending on the episode plot. Which is also cool as Dan Aykroyd originally wanted ECTO-1 to have “mysterious” supernatural abilities.

This more detailed ECTO-1 was featured in the season 3 episode Halloween II 1/2.

I don’t remember today, ECTO-1 being able to jump with its super duper suspension and jet pads was either really cool or over the top. Similar to when Winston once installed a life raft (Sticky Business) so ECTO-1 could float on water just in case.

This ECTO-1 production art was drawn for the season 3 episode Big Trouble With Little Slimer.