30th Anniversary: Ghostbusters On The Record

) had a numero uno song to accompany it. Before it made some Halloween sampler in the coming decades, Ray Parker Jr. wrote and sang “Ghostbusters,” which remained #1 on some Billboard charts for 3 straight weeks. Apparently Tina Turner was tired of everyone asking “Who ya gonna call?” and wanted to know “What’s love got to do with it?” Did she not understand love and a lot more had everything to do with “Ghostbusters” success?

Everyone really loved “Ghostbusters”, except for Huey Lewis. You would think he understood the power of love which was way stronger then a new drug he wanted in January of the same year.

That wouldn’t have stopped Ray Parker Jr. Columbia Pictures, and Arista from releasing both “Ghostbusters” and the complete soundtrack on various media of the era. Within and outside the US, the Ghostbusters single and the soundtrack were available on various vinyl sizes, cassette tape, and eventually compact disc. 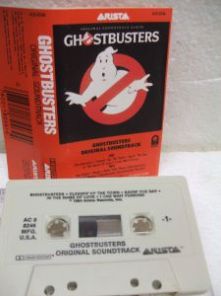 If I had been older then 6 in June 1984 I would have ridden my bike to the nearest record store. Which back then was probably downtown, really far away from my house. Fortunately I was a kid and I had older people to turn to. I don’t exactly remember who bought me the Ghostbusters soundtrack on a tape cassette.

I don’t remember when in the following decade I didn’t have the plastic cassette holder with paper to identify the tape. I had the tape, would play it throughout the 80s, put it kinda in storage until around 2000 when I played it in my car. With the times a changing for both Ghostbusters and I, the tape finally broke. I probably had the feeling it was going to happen, the soundtrack arguably (and you’d be wrong) is a great selection of 1980s music which isn’t derivative of just one genre…man.

Eleven years earlier in June 1989 I graduated from my elementary school’s 6th grade. Which meant I was leaving all I knew behind since Kindergarten and starting a new. Like episodes of The Wonder Years or Boy Meets World. Before that could happen about three months later, on that June day my mom gave me a present. It was a tape of the Ghostbusters II soundtrack. As Ghostbusters II couldn’t have been out in Northeast Jersey yet, I wouldn’t have known where she bought it.

I’m not really sure what happened to its holder which has the Ghostbusters on it, similar to the Ghostbusters II poster. The only reason this tape survived because it wasn’t played as much and thankfully the 1990s were a time for CDs and Napster. Wait, what?

I don’t remember when I bought either of the soundtracks on compact disc. You better believe I remember where I bought them. Our mall (the one about freedom during 1996 and after) had two music and movie stores. Both Sam Goody and Suncoast Video. Where I was always seeing Ghostbusters on tape and CD. I was always kinda sorry I didn’t buy a new copy of Ghostbusters on tape.

Other then possibly a few different movie images for the back cover and Ghostbusters art on the laser music disc, Ghostbusters’ soundtrack is perfection. 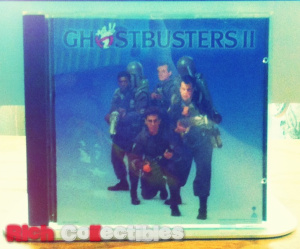 The “no ghost” logo on black remains classic cool. In 1989 Ghostbusters II was beginning to represent a new era. An era where the studio wanted you to know without any movie explanation the “no ghost” proudly raised two fingers and stood its ground on foot. As Ghostbusters was an empire by June 16, 1989 (or November 3, 1989 in NJ) the Ghostbusters ruled poster art with looking mean cool, showing off new colored uniforms, and new equipment. What did that do? I didn’t know, it wasn’t slime time yet!

I’d really like to read Sigourney Weaver’s contract. Was Dana more important then the thumbnail scene showing Louis and Janine about to give Ghostbusters a more mature rating? I don’t think so. Thankfully Oscar was sleeping after the French bread pizza.

I’m not entirely sure, between 1984 and 1989, Arista/RCA had been taken over by MCA which by today were absorbed with an acquisition from Sony Music Entertainment. Which has spun those previous companies into different labels.

Interestedly enough none of those labels had released Ghostbusters well known score by Elmer Bernstein on any format at least within the United States by 1989. Word on the nice streets is the score was available for promotional use. In 2006 Ghostbusters’ score was finally released commercially in limited release. Long before that I bought a copy off eBay without knowing it was pretty much a rip.

It seemed sorta professional, not official with its front and back flimsily covers. Unless it was copied (which I seriously doubt) from the promotional copy (which for all we know was on a record) the seller could have at least used the Ghostbusters movie title. What’s one more “no ghost” logo when their are already 10 of them?

Look at that quality CD-R printing.

What’s with that pattern, what is that? Barely remotely related to Ghostbusters at all. Even all these years later I don’t feel too bad for overpaying for a copy of the score. I never could buy the official one, I’m still glad I have it. Unfortunately I wasn’t the only ghosthead who was mislead about this score. I still can remember Troy aka Netsolo writing about this on his archived Ghostbusters site, Ghostbusters HQ. 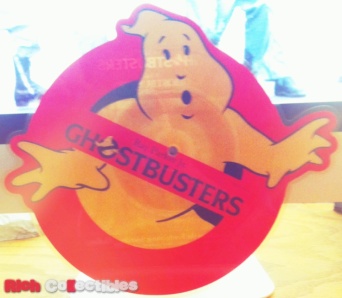 As in a way I was too young to appreciate Ghostbusters on vinyl, I didn’t have them. I had records of different speeds, (45s, 78s?) a very small collection today. I even had my own player. Part of the problem was for a time I had older family living with me. Outside of them we had close neighbors who also had family with (what I would have considered then) an extensive record collection. Couldn’t borrow one of their records? No problem, that’s what that record section at the library was for. Thanks Peter Pan!

The only Ghostbusters records I had were Ghostbusters II cereal premiums that told kids weather you won an ECTO-1A replica. The odds had to be astronomical. They weren’t meant to be saved, so why would I save them?😦 Last I looked, their were some available on a popular auction site.

As the record “no ghost” is looking in the wrong direction, (which also occurred in a flipped shot of ECTO-1 during Ghostbusters’ editing) this might have been at one point made for import. It’s still an odd choice since the “no ghost” logos are correct in the title art, both a side and b side.

This precedes the Ghostbusters soundtrack, containing two versions of Ray Parker Jr.’s “Ghostbusters.” A side contains the hit single whereas B side features Ghostbusters instrumental version. I’d like to think the “no ghost” was white at the time, at least until 2009. Exposure to various elements have yellowed it. It doesn’t look as bad in the pic as the actual record.

I didn’t have a way to play it, it appears it was played at some point. The way its made, it doesn’t even seem playable. I don’t have plans to try to play it. I pretty much bought this single vinyl as a “collector’s item.” 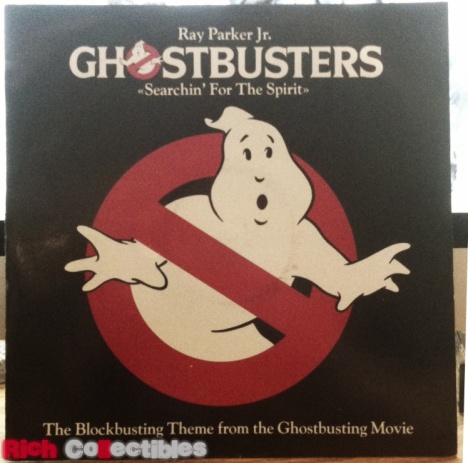 By 2011 I had known about a Ghostbusters vinyl record that had these Ghostbusters mixes on them. I’m pretty sure the original ghostheads who talked about them had converted the record tracks into digital files. As it may have been rare, personally that was very cool for the time.

I may not have been looking for this exact record, came across it on a popular auction site. I either won a low bid or bought it at a low price. Man, again with the reversed “no ghost” logo. Again, if it wasn’t for the US correct title logo, I would think this was all import. Maybe at the time, designers and studio suits hadn’t made up their minds about the “right” way to use the US and international “no ghost” logos on merchandise.

My record sleeve looked much better until late May, early June 2014 when their was a little water damage in my garage. We had a broken central air conditioner drain, (fixed first week of June) thankfully my collection of movies, comics, books, and other collectibles were pretty much fine. Unfortunately where “Searchin’ For The Spirit” was stored, water (freon?) had gotten on the sides and a little bit of the cover. By the time I knew, it had dried. Thankfully too the record wasn’t damaged.

I can’t really tell you what Searchin’ For The Spirit on A Side sounds like. Haven’t heard it in recent years. If I remember its a longer kind of remix of “Ghostbusters.” Which might not make sense 30 years later, sounded right artistically for the time.

Searchin’ For The Spirit B Side features the original Dub version in all its instrumental glory! Read that last word in Gerard Butler’s portrayal as Leonidas. If you’re older then Gen X, you know despite popular belief a long hair guy with shaved sides who wears “nerdy” glasses did not in fact invent the genre.

These remixes were available before the “forthcoming soundtrack album.” If you were old enough to remember, had the Ghostbusters” music video been airing on a channel that came about because we needed a place to watch music videos before You Tube? The infamous Ghostbusters dancing scene (in Times Square) from the end of the video would also feature scenes from Ghostbusters. Which would have been spoilerly to the movie’s release.

If you remember as well, what are your memories of either the “Ghostbusters” single, mixes, and/or the soundtrack? Since 2011 “Ghostbusters” on vinyl and vinyl has had a resurgence. That’s what I’ll be talking about sometime before Ghostbusters 40th anniversary.