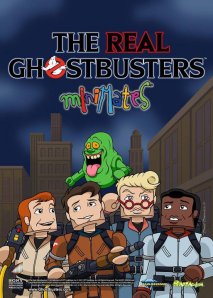 When I was a kid I loved this episode, what fan didn’t? Its a slight sequel and inside joke to Ghostbusters years before Ghostbusters II. In the episode while Peter is being interviewed he is asked to recount how Slimer came into The Real Ghostbusters lives. Cue up a flashback that shows The Real Ghostbusters coming back to a badly damaged firehouse wearing their Ghostbusters uniforms with marshmallow “stains” still on them. Fortunately while the Ghostbusters were really busy one of them or possibly Janine took the time to order them their new colorful uniforms. I love little tidbits like this. Good thing someone did as the uniforms they wore while battling Gozer had way too much ectoplasmic radiation and needed to be destroyed. Peter was suppose to take care of this, basically forgot while they rebuilt the firehouse and a new containment unit. Too much time passed and the uniforms took on a life of their own becoming ghostly copies of The Real Ghostbusters.

Why Kenner never made the “anti Ghostbusters” is beyond me. I would have gave up my lunch money for them and all The Real Ghostbusters ghosts we’ve been getting in 2011.

8 Year Old Rich: “That’s why we have birthday parties at the arcade.” Good point, I was a smart kid.

Earlier this month Art Asylum showed us our first production shot of the Series 3 four pack which is estimated to be available on November 30, 2011 for $17.99 USD.