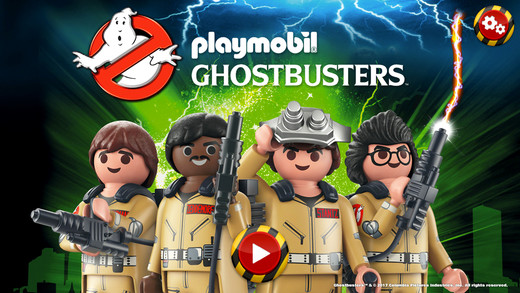 With Playmobile Ghostbusters (Ecto-Containment Blog Post, February 2, 2017) ready to believe you next month, Playmobil (US) have released a Ghostbusters mobile game set in the same Ghostbusters Playmobil-verse. That should be a thing.

Ghost alert at the Ghostbusters™ Firehouse! 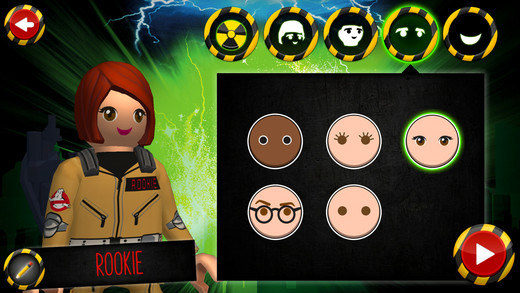 I downloaded the version for my iPhone 6, spending more time originally then I intended to with this newest Ghostbusters game. I chose a character, Spengler of course. I haven’t created a character. I could seeing doing that.

It is a fun game overall, meant naturally more for kids. Which is why it can get repetitive. The controls are fairly simple. They might be more manageable on an iPad or other tablet.

As you’re into the action of the sheet like Playmobil ghosts, depending on the “wave” Slimer may show up to get in the way and probably knock you over.  Although you can annoy it some. I’ve also seen the library ghost more then once, although you aren’t allowed to bust it. I don’t see why not, either true to form to Ghostbusters or that would question Playmobile in providing what and how many upgrades. i.e.: Ghost Trap, Life, Proton Pack Upgrades.

I understand the need for a timer in the “challenge,” it might be better if their were difficultly levels instead. I know this is meant more for kids then ghostheads since the age of 6.

Occasionally Mr. Stay-Puft will show up, (appearing to be inside Ghostbusters HQ) you don’t seem to be able to roast marshmallows at all. I suppose that could be scary depending on age level. Either that or Stay-Puft is more outside. Which is where a multiplayer (even with AI) could come in handy as there can be multiple ghosts coming in your direction.

Like most mobile games (which may depend on how you play it) Playmobile Ghostbusters game made my phone get warm. By the time it could have been an issue I was ready to take an overnight, multi-day break.