Diamond Select Toys Ghostbusters (Ghost?) Select Slimer was shown like before with multiple heads. The heads are removable to give the ugly little select spud expressions and apparently allow it to eat a mouthful of plastic hot dogs.

Do you want this figure? :p Another look and angle at Dana Barrett as The Gatekeeper. 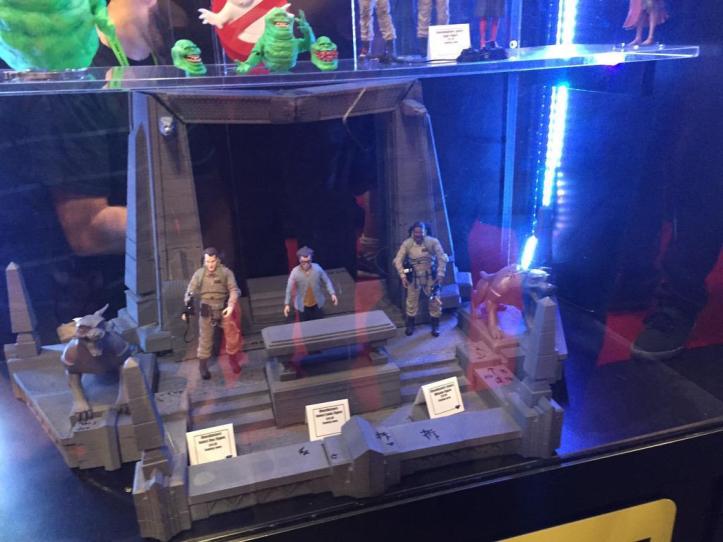 More information about Ghostbusters Select figures from Zach aka DSTZach who works for DST:

Toys R’ Us may have their basic Series 1 by end of year, but the Select figures with large diorama pieces will hit early 2016, most likely. On the bright side, looks like we have finally sorted out the diorama. 15 pieces, spread across 15 figures. Had to add two all-new characters, of the deceased variety.

If you want to term it as two lines, you can, but all of the figures you have seen (and more) will be available at comic shops with diorama pieces. 15 total, including Louis, Ray and Winston.

Some of those figures will also be available at TRU, without the diorama pieces, in thinner packaging — it is how we have always released figures for Universal Monsters, Munsters and (recently) Star Trek Select figures. The figures will be the same, as far as I know, although I cannot guarantee that ALL of the accessories will be included at TRU. The diorama pieces definitely will not.

They will have the same Series 1 as comic shops, and most likely Series 2, but I am not sure if they will carry every figure in the line, although their plans also may change. Because of the diorama needing extra time, TRU will most likely get their Series 1 figures — Ray, Louis and Winston — before specialty, although I do not know exactly when either will hit.

Ghostbusters Selects (first three figures) can be pre-ordered on-line (also check with your comic book shop) with a retail price of $24.99 USD each.