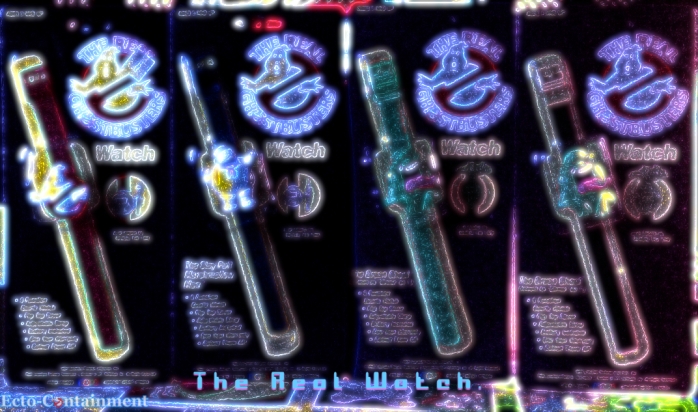 Recently a technology company released a digital watch. The core of the produce section watch is the same, their designs, style, and even the way they’re made varies. Did you know another company that invented technology also was involved in the watch business back in the 1980s?

Amongst the upper echelon of Ghostbusters merchandise, originally meant for children, also stylish enough for adults is The Real Watch, watches based on the Ghostbusters and The Real Ghostbusters license.

My memories fuzzy on when I first knew that not only is their a The Real Ghostbusters watch, their are four of them. Owning a stylish Ghostbusters watch as a kid is not something you idly forget about. In adulthood I can probably thank a well known auction site for bringing them back to my memory. I don’t recall buying one. That was pretty much it until 2006.

The Ghostbusters franchise I’m apart of, Ghostbusters NJ made our first fan film in 2006. Near the beginning of Leeds Curse, I had been waiting too long for Bill to arrive. Before he finally shows up I check my The Real Ghostbusters Slimer watch. Surprisingly it fit, although barely. That’s the last time I wore one. Ever since I never forgot them, I still didn’t know I would want to collect them. Until 2011.

These Real Ghostbusters watches come up occasionally on eBay. I bought my first one. I don’t remember which of the ghost characters. Then when another friend and his brother had gone to a con he bought multiples of these watches. I think while I would have bought them, they were gifted to me. 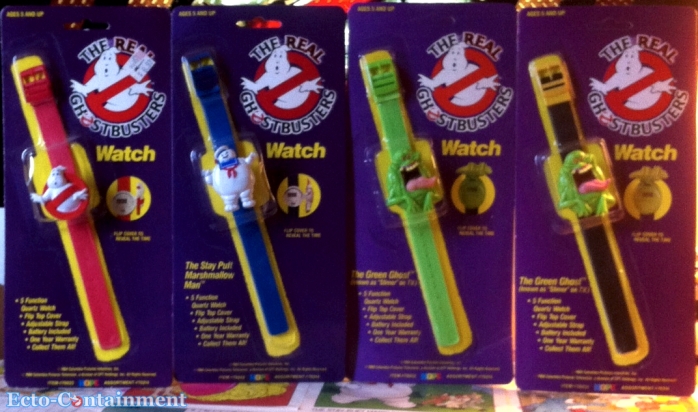 The Real Ghostbusters watches were made by Hope Industries, Inc. HOPE (who may have been inspired by the ’80s produce company’s colorful logo) didn’t just make Ghostbusters watches. They got in that whole sneaker snap craze and even made fridge magnets. 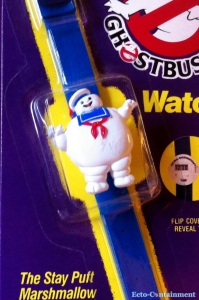 Hope had done something no other watch company had ever done, made a marshmallow man themed watch! The happy version of Stay-Puft lived inside The Containment Unit in The Real Ghostbusters. He was the only ghost who had TV privileges (Satellite?) and occasionally would be let out to help The Real Ghostbusters and his best friend Slimer.

And also Stay-Puft came with a blue watch band. 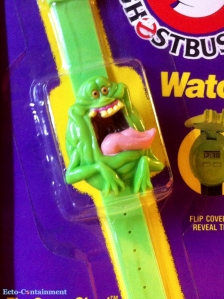 For some reason (maybe it was in pre production) Slimer was called The Green Ghost. Which was important enough for Columbia Pictures Industries, Inc. to trademark. Kenner also called Slimer, The Green Ghost. Both companies added he is known as Slimer on The Real Ghostbusters. 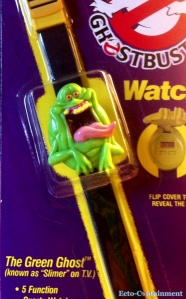 The only differences are with the band and clasp colors. 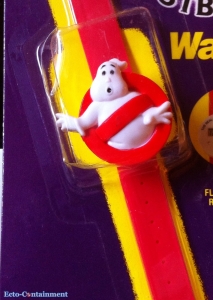 From 2011 until summer 2014 I owned three of the four watches. While these watches aren’t that common place on auction sites, seeing the “no ghost” logo The Real Ghostbusters watch may as well be a myth. Built up over the latter half of the 20th century to the future we couldn’t wait to live in.

When the rarity of the red Ghostbusters logo watch would be available, it usually wasn’t in its card. I didn’t need for the packaging to be mint, I needed it to “match” the other three. Also asking price was of consideration. Ghostbusters shouldn’t break my Stay-Puft bank.

I found away from eBay (through Amazon) some MOC version. The seller may have been right in thinking the value was worth 1 Benjamin Franklin. It was an option, I wisely waited.

During the 1980s these watches retailed for just a little under $7 USD. In stores such as Kmart. Which probably means they were probably available just about everywhere in similar stores.

That time almost came after Ghostbusters 30th anniversary. I had been watching an auction for one in its original card, didn’t bid. If I had I might have ignited a bidding war. During the Fall I believe one of, if the not the next auction for a Hope “no ghost” Ghostbusters watch came up on eBay. The seller’s starting price was reasonable. This wasn’t 100% mint as the bubble has a bit of a indentation. I took a chance and won. When I win, Ecto-Containment wins.

This is either a later version of the card back or a second version. The other card back omits the larger “no ghost” logo. In its place is an image that reads “Collect Them All!” and shows images of the character designs. A little surprisingly Hope never produced The Real Ghostbusters themselves. Maybe it was the terms of the license or to prevent kids from having nightmares.

To see that snazzy 1980s digital time and set the watches multiple functions (calendar and time!) just flip open the cover. What about those specs?

In the ’80s if you didn’t own one of these Hope The Real Ghostbusters watches you might have owned the Ralston Ghostbusters cereal premium purple watch. It has a decal that reads The Real Ghostbusters and has a scared Peter Venkman. In the middle is a digital face for the time. If I ever owned that, it was also forgotten until the internet age.

Hope (uh yeah) you enjoyed reading about high tech Ghostbusters watches. In a later update I can share some of those other Hope Ghostbusters licensed items.