Yesterday I started working on my 30th Anniversary Lego Ghostbusters set. I documented the build for iRichard Roy and my related Ghostbusters sites.

LEGO decided that ultimately to build 4 Ghostbusters, their proton packs, a trap, and of course their Ectomobile 508 pieces are needed. I don’t build Lego sets often, none that can be pricey, or complex. Building Lego Ecto was going to be a challenge. It’s Ghostbusters, it’s the 30th Anniversary, (my 6 year old self would have wanted to build this from Duplo) and the first and only official Ghostbusters Legos. 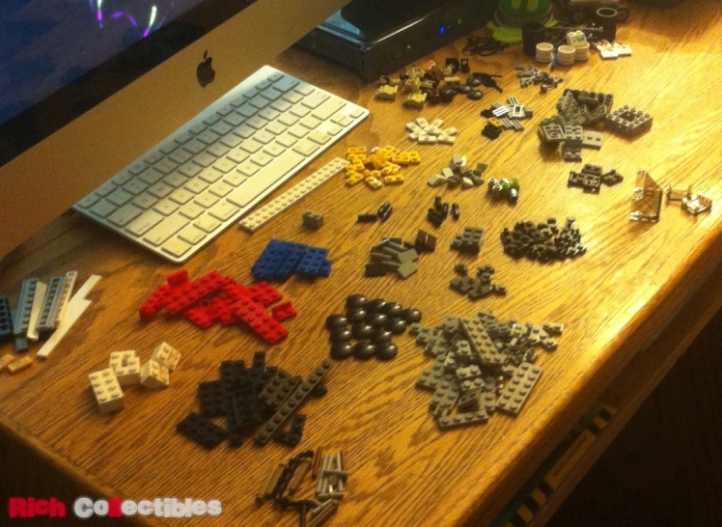 I would have wanted to organize the pieces anyway, Lego basically recommends one do that before building. In the above picture I had quart size zip storage bags with other organized pieces already in them. This is when I had finished grouping the pieces.

If you’ve ever put a Lego person or mini figure together, their is little difference with “The Lego Ghostbusters.” The expressions are what really make each of these mini figures their own. From the concept to production Brent and Adam captured the personalities and style of each mini figure. Until today I didn’t see each face has two expressions, depending on how you want your Lego Ghostbuster to feel. That’s why mine aren’t all closely matching.

I can safely assume all Lego mini figs are the same size. We know the actors weren’t all the same height. Egon would be the tallest, his hair style helps define the perspective for his height. Someone must of had Kenner’s The Real Ghostbusters Fright Features Peter in mind with Lego Peter’s hairstyle. I don’t remember Bill Murray ever having that much hair. Further small details such as Lego Egon’s glasses and Lego Winston’s mustache add to who the characters are.

Without reducing font sizes to 1, Lego wouldn’t have room to add each of their names to their uniforms. They use their initials, which for Lego really works. In case its missed, the back of their flight suit has their first names on the back of the A.L.I.C.E pack or back pack frame.

Usually when a Ghostbusters character figure is made, they come with their own accessory, which goes with their character. Peter’s is kinda the Ghost Sniffer. Every ghosthead knows Egon is associated with a P.K.E Meter and Ray with a Ecto-Goggles. Yes, in Ghostbusters the original three did use walkie talkies, it would have been nice if the Lego Ghostbusters set had included a P.K.E Meter and Ecto-Goggles. Also as seems a bit typical in the last 5 years with Ghostbusters collecting Winston is kinda the Ghost Trap guy. Unless it was from when Ray handed over two full Ghost Traps to Winston on the day he was hired. This is nit picky, why didn’t Lego include pieces to build at least one other Ghost Trap?

If one wants to display the Lego Ghostbustters, part of the set includes pieces to build a stand. Not all of the mini figs can sit in Lego ECTO-1 and what ghosthead wants to keep them in the box? The people who designed and physically produced this set are Lego builders and collectors. They like to display their creations. Its not at all surprising to me that the option to display the characters was included.

Building a Lego Ghost Trap was easy compared to building 4 Lego Proton Packs. As a ghosthead who has been around this stuff (movie, cartoon, and prop replica wise) since I was 6 I started building the Lego packs in the familiar shape and parts Lego included. Because they are Lego pieces, of course they don’t conform to a screen used look for this “equipment.” Once I changed my thinking a little and “studied” the instructions, building three additional Lego Proton Packs was easier. I almost built them like I was an expert. 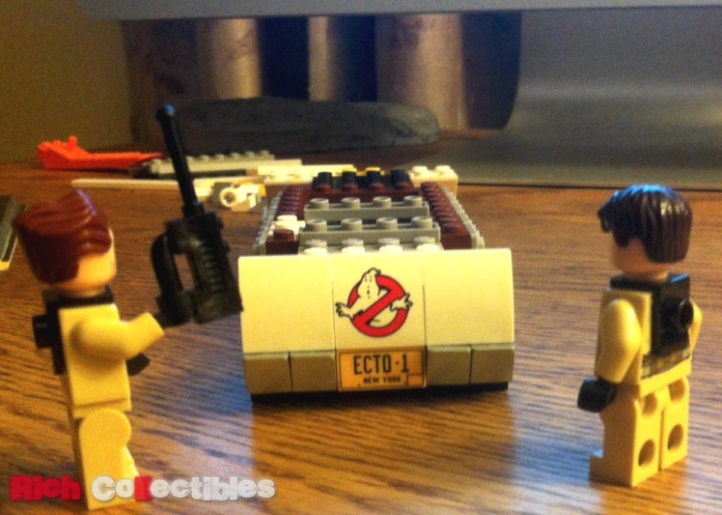 Ray, only you would add our logo and a license plate before the car’s even built. – Peter

At this point in the build I had finished building out the front grille/lights area. More ’59 classic Cadillac features were to be added later.

This was my last build picture before I continued today with building and completing my Lego Ghostbusters ECTO-1. Thought it’d be fun to show the Lego Ghostbusters working on their car. No, Lego Peter didn’t fall over. You know long before now he would have been bored or fallen asleep. If you own set 21108 and know the details you may have noticed, the passenger side wheel isn’t going to fit under the passenger side fender. Where Lego Winston is “working.” I didn’t do that for this picture, it was accidental. When I saw a wheel wasn’t going to fit today, I had removed the side “panel” pieces to fix the spacing. 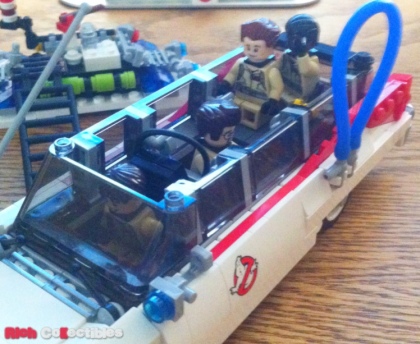 This is the top/interior of the Lego ECTO-1 completed. The roof is removable so The Lego Ghostbusters can sit inside. They kinda sit like they’re riding a bus. Two mini figures can face each other in the rear, thinking of people’s real spacing and the actors playing the characters, it just seems awkward. Their is hardly room for equipment. I was able to fit 1, yeah one Lego Proton Pack in the front, practically attached to Ray. The Lego Ghost Trap kinda sits beside Peter and Winston.

With the roof on, supposedly three mini figures can fit. Their aren’t any chairs for the mini figs to sit. With the scale/dimensions Lego produced unless a figure lays down where the Lego Proton Packs would normally go, for playability a fan would have to put at least one mini fig elsewhere.

I know the real car is about 21 feet. The concept Lego Ecto-1 was built larger to accommodate the mini figs and accompanying equipment. I really don’t know why Lego chose not to do the same. If it was longer and wider, all 4 mini figures and packs could have fit comfortably. 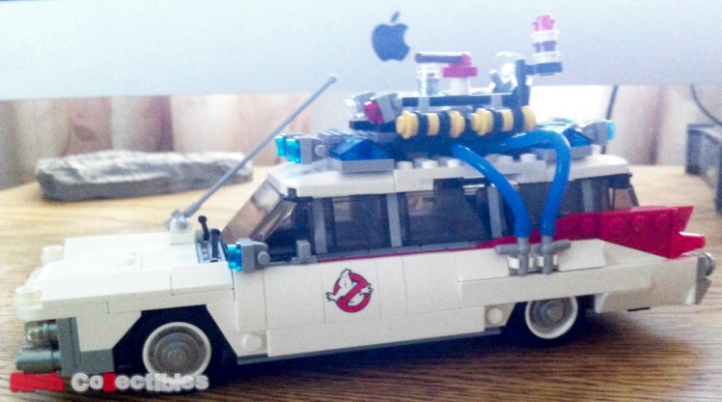 The iconic driver side of my Lego ECTO-1. Even though I didn’t have a clue what the blue tubing function was when I was 6, its a stand out feature for a 55 year old ambulance hearse used to catch ghosts. When I first took the piece out from the Lego bags, I thought I was missing one. The clever way Lego designed it was to be one bendable rubber piece. My only nitpick is the ends could have been bigger so it wouldn’t have to be tight and stretch on the jack like pieces. If you were born before 1990 you should immediately get the comparison.

I didn’t take a picture of just the roof, if you’ve seen Ghostbusters at least once you know their’s a lot going on up there. Sirens and lights are just the beginning. Their’s equipment for detecting ghosts and getting the Lego guys out of Lego City parking tickets. Due to the heaviness and removable roof Lego included 14 support pieces (10 are used for the chassis) with 4 for the underside of the roof.

Its possible as a 36 year old male I’m unable to put the supports exactly how they should go. As I added the small, delicate Lego pieces to the roof, making it heavier at least two roof pieces would “snap” from their supports. Also causing various roof pieces to come off as well. Fortunately even when pieces would bounce off my desk I didn’t lose any. After a handful of attempts, I had enough. I ditched (still saved them) the so called roof supports. I’m not planing on removing the roof, it should be ok.

I was testing a theory of the worse kind, which meant removing the roof. Without the so called supports, the “heavy” equipment pieces wanted and did come apart. I added the 4 supports and had to rebuild the roof equipment a handful of times almost losing some of the small pieces. Its still a pain, I finally got it. 8)

While the support pieces add stability to the roof, they’re not custom enough for how this Lego vehicle roof was produced.

With the number of hours I spent building the first ever official Ghostbusters Lego set, it didn’t surprise me when I noticed the completed (or so I though) ECTO-1 had a part that wasn’t built to spec.

Again with that darn roof. Maybe it was noticeable by others, not commented on. After all Legos could be custom. I had the underside of the roof (what would be part of the frame in a real vehicle) pieces sideways. Which with the supports for the 3 roof pieces elevates the roof. When looking at the box and others finished projects it was obvious to see.

About a day ago I fixed it with the black circular supports which what do ya know go together smoothly. Even the smaller roof “equipment” didn’t cause much of a fuss by this point.

When I make time I want to take some hopefully artistic completed pics.

I’m not a custom Lego builder, I do consider myself a creative type. Perhaps sets like these and sets with a lot more pieces are also made for Lego fans who enjoying adding more and more pieces until a project is complete. As I was building the side doors, other paneling, (hey like the roof) I was wondering why Lego didn’t just include longer pieces for some of the paneling.

The green “tanks” on the passenger side comes more from Ghostbusters: The Video Game if I recall. I don’t remember their being just one yellow tank on the real ECTO-1. Yeah, I guess the yellow tanks are smaller, without checking for screen accuracy I also don’t know why Lego couldn’t have produced them like they did with the green pieces. Or made both side “tanks” individual pieces. Either way, they’re a pain.🙂

Ready to roll without the Lego Ghostbusters. Maybe Lego couldn’t have produced these as one single piece, I really like how they created separate hood pieces to match the classic look of a 1959 Cadillac.

After paying Lego a compliment, I don’t want to nitpick. I want to point out the “proton cannon” is red. With all the small details, it could have been an easy oversight. Yeah, it could be painted for “accuracy.” The screen used prop also had two tube shapes. For this set because of scale, I get why they’re only using one.

Just about every ghosthead is showing their Ghostbusters Lego mini figures by their Lego ECTO-1 battling Mr. Stay-Puft! At least for one photo which took me time to set up I wasn’t going to be that different.

The only problem is the Ghostbusters mini figures can’t stand without assistance when the heavier Lego Proton Packs are being worn. The packs are big enough to slightly take away from the fact the mini figs are sorta sitting. Did anyone at Lego even use a level?

I also posted this in the comments:

As an addendum to my actual Lego review I noticed about 2 days later I had a “part” (the maroonish circular part) from the Lego Nutrona Wand or “gun” of the Lego Proton Pack at the tip instead of near the handle.

The Real Ghostbusters subconciously was an influence for that. By moving the part, it gave stability to the mini figures so they can stand while in “action” after all.

Its a little bit too bad Lego didn’t include a Lego Slimer. Most ghosthead collectors have enough of them along with Stay-Pufts standing at 2 feet tall! The one I used for this picture is a 11″ bank from Diamond Select Toys.

Even with my honest criticisms I had fun with the first official Ghostbusters Lego. Yes it was hard work, I enjoyed seeing it all come together. I’ll continue to enjoy it by displaying the mini figs and Lego ECTO-1.

Which may look good together when I finally buy the Lego Back To The Future DeLorean. 8)