Even though I ordered my Ghostbusters flight suit last October and already had the patches I didn’t have the right boots. Actually I never had near screen accurate boots for my Ghostbusters costumes, er uniforms. As an aside the comedic actors basically wore military grade garb because of Dan Aykroyd’s military/”tech” interests. Also their’s the idea that the Ghostbusters can feel like “ghost janitors.”

Whether the boots were easily available or not to a major Hollywood studio and or famous people in 1983 the main actors at least wore Corcoran® or Carolina® zippered combat jump boots. The exact model has probably been discontinued. You can still buy a similar Corcoran boots between $150-$200 USD. By human nature and evolution I’m not a boot guy. In a civilized environment I would never spend that much on boots. I never spend anywhere near that even on sneakers made on the other side of the world.

Since I took, not always intentionally my sweet time in researching the right boots for me, I came across other boot brands, one named after a town I grew up in, the other which bares resemblance to a fictional motel. Those boot brands can cost less then Corcorans. During my searches I came across Working Person. At times the boots I might have ordered were discontinued, thanks to the site and internet cookies I learned of another new, similar model. With work continuing on transforming my Tru-Spec flight suit into a Ghostbusters uniform the time was now (well then) to order boots.

I also noticed since Presidents Day the price of boots have been on sale. A pair of Bates 2184 Side Zip Paratrooper boots were on sale for $106.20 USD. Saving about $12 which includes free shipping. As I needed the boots in a week for a trial run, I paid for three day shipping.

Based on research and positive reviews about the particular pair of boots I ordered, I had an overall positive experience with Working Person. They have a variety of sizes for a person’s individual foot needs. Depending on how a shoe or sneaker is made sometimes I need a wide or bigger size. Related sometimes health issues felt like I should order a half size up at least. After ordering their wasn’t as much personal communication, even in the standard form email sense like BDU. However, this time I didn’t forget to include my street address. :p It wasn’t as needed.

I chose UPS 3 Day because of how fast I needed the boots to be delivered. Otherwise I would have accepted free shipping and saved about $30 USD. I was expecting the boots to be delivered in a shipping box. Working Person used a heavy duty plastic bag that other clothing retailers use. Its a minor nitpick, because of this the Bates boot box was a little beat. The paratrooper boots were well protected and weren’t damaged during shipping. The UPS driver (maybe too because I was my usual polite self) was friendly and it made getting my package a bit better. 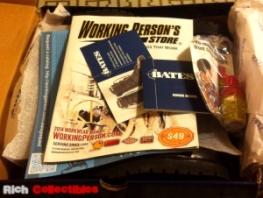 Bates lined the box with two “layers” of logo tissue paper which not only covered the boots, but the extra stuff Working Persons included in the box.

Usual company catalog was included with future discounts, quality tags from Bates, and because Working Person must have a lot, 1 free 5 Hour Energy with advertising about that product. I’m weary of over caffeinated drinks that are suppose to replace coffee or soda and have no crash affect. If it wasn’t for that one Stacker 2 “fat burner” I took 15 years ago I could have honestly said I never had any of these similar “health” products. I can still say I never had one of these from any company. I don’t plan to. For all the years energy drinks have been around I’ve only consumed about 4 cans.

Not pictured is this other “protective” layer either Bates or Working Person provided. I feel like its so the boots won’t get scuffed. These are the shiny leather size zipper paratrooper boots in a size 11 W. A 12 might have been better. Once they’re on, they fit well. I’m not use to them yet and they probably need to be broken in some.

Yeah, not the best picture because of the lighting and “display.” After trying them on with my Ghostbusters flight suit I was happy. I’ll be wearing them more this weekend when I’m at Monster-Mania Con in Cherry Hill, NJ with other Ghostbusters NJ members, other Jersey Ghostbusters franchises, and more ghostheads.