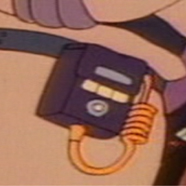 Last month around April 13, 2012 a Ghostbusters fan, (HandSolo) shared his discovery of the animated version of the “Belt Gizmo.” A piece of Ghostbusting equipment that’s always been part of the uniform, we’ve never known its function. That wasn’t good enough for the creative behind The Real Ghostbusters. When a story or script called for it, they gave a couple of functions to the Belt Gizmo. 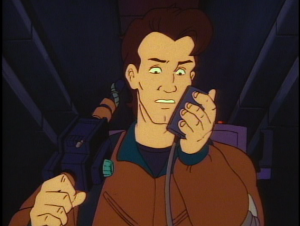 In the season 1 episode Mr. Sandman, Dream Me A Dream we see for the first time what the Belt Gizmo can do, used as a communications device. Kind of like emergency personnel’s “walkie talkies.” It’s a professional term I first learned when I was a kid. Peter pulled the belt gizmo up from his belt in a hallway before the Sandman temporarily got to him.

In fact three out of four times the Belt Gizmo was used, it was as a “walkie talkie.” 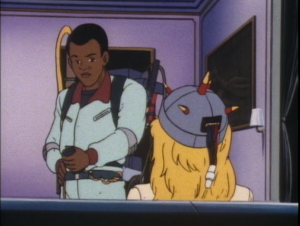 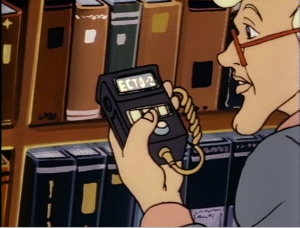 What I and others find more interesting for the Belt Gizmo’s function is it being used an alert/pager system. We did see that briefly in Baby Spookums. The full range of what the Belt Gizmo can do was seen in the season 3 episode Once Upon A Slime. In the episode Peter and Winston were in trouble with Ecto-2. About the same time Ray and Egon were at the library. This is when Egon’s Belt Gizmo “goes off.” He receives the text message “Ecto 2.” When a The Real Ghostbusters is out of range he (or Janine. maybe Louis) can use their Belt Gizmo to alert another The Real Ghostbusters.

Disclaimer: Screenshots are used for reference and no ownership is implied.