Nerd Block, one of a kajillion box subscription services from time-to-time has Ghostbusters related items included with whatever that particular month’s theme is.

Eventually some, if not all items are no longer exclusive. With the t-shirt don’t hold me to that. I’m not subscribed to any box collectibles. Which is why I’m writing about these roughly 8 months later.

During the first week of March 2016 I saw through one of their internet ads Shirt Punch, (one of those deal sites where items are no longer for sale 24 hrs later) were offering Ghostbusters t-shirts and the former Nerd Block items. As I had been wanting both the t-shirt (you know in my size) and the Ghost Trap, I went full impulse buy.

I’ve never ordered from Shirt Punch before. While I had enough time to check out their site more, (embarrassingly something like 13 hours) I didn’t until my order shipped. This next part is partially on me. If I had read the FAQ sooner I would have least known bundles take longer then just t-shirts.

I also didn’t know Shirt Punch is a Canadian company. Canadians are great, for example creating Ghostbusters, Ghostbusters sites, and professional wrestlers. If payment accepted is in American currency (an assumption on why I never thought they were outside the US) and said company is in Canada, (with said website registered in Arizona) maybe said company could tell potential customers through their website.

I didn’t even know when I’d get my order as Canada’s Post site never updated. Today on my way out, the package was by my front door.

With public feelings pressed into the interwebs forever let’s take a closer look at items you may have owned within the last almost 8 months.

The main box services come with a t-shirt. This was one to have. I have seen them prior to that deal on eBay. Not always in my size and for around $20-25 USD. 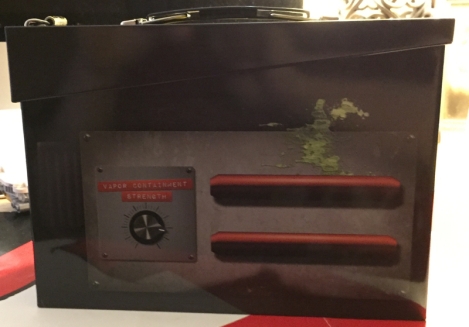 The other reason I wanted this bundle (for under $20 USD) was this Ghostbusters Ghost Trap lunch box/pail. It was free. From what I wrote above the read more tag, was it?

This lunch box is bigger then I remembered. With its realistic Ghost Trap feel and parts, a clip/lock opens to store some of your stuff. If you need to be on the move, it has a handle. I haven’t tested how well that would perform. I wouldn’t imagine ghostheads would be carrying rocks in the fairly deep inside space.

If you wanted to buy just this lunch box they can be found through on-line retailers for $20 USD, possibly less. Before applicable taxes and shipping. 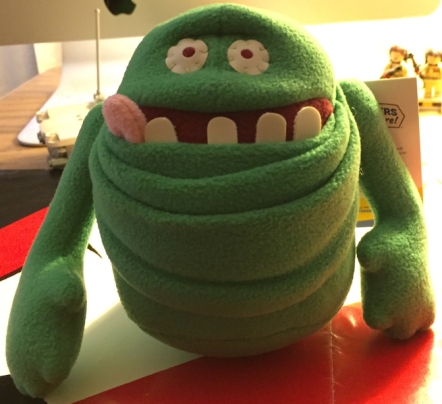 This Slimer plush was also free. Again, was it? From the beginning it reminded me of Kenner’s Green Ghost and a Spud with two cooked eggs for eyes. Nerd Block’s Slimer plush is also bigger then I remembered. While in my hand is basically the size of a Nerf football. Almost handles like one as well.