When I gave my first impression about Matty Collector’s Ecto Goggles on August 26, 2013 I figured that’s the last I would have wrote about them. Within a few days, then about a month later things changed with my pair of Matty Ecto Goggles. I thought I commented about this on the site, (might have been during the transition) of course I can’t find it now. When putting the 3 AAA batteries in (two on the bottom, one on the side) and removing them I had been using a 12 volt power screw driver. It’s usually easier for me and it hadn’t been a problem. The last time I went to put the batteries in to film the animations again, I couldn’t remove the side screw. The one that powers the goggles. I was sure I stripped the screw and probably did. I don’t have the right tool or bit to deal with it. Friends and I’ve tried without the bits/tools, even tried the rubber band trick that kept coming up on-line. I know its my fault, I’ve felt if Mattel didn’t put that one side screw inside that one “part” for the look, small power tool or not it’d be free. Instead of me some day possibly spending money on bits and tools I normally don’t need. Lesson has been learned which is why I’ve been careful and haven’t even had that 12 volt power screw driver anywhere near my Neutrino Wand.

As I’ve been putting together my Ghostbusters uniform during Septmeber 2013 and will wear the Ecto Goggles I decided to apply the decals. Using screen shots provided by ghostheads, I applied a minor amount of decals where it looked screen accurate as it could. When they’re applied, you can see how small they are compared to prop replicas. Maybe Matty Collector/Epic Creations would have liked ghostheads to use just about all of them. It would have been too much. 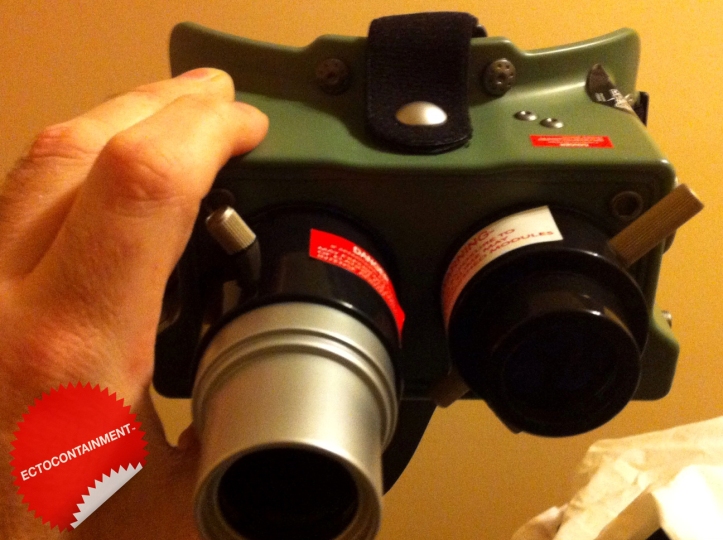 For example the lenses technical and danger decals could have been as long as they’re wide. Although I don’t show off all sides of my Ecto Goggles with the decals applied, you might notice slight peeling. I definitely handled them enough, I don’t know if the plastic was oily. They haven’t been displayed and usually stayed in their box, inside my house. It was unusually hot for October 2013, humidity could have been an issue. I may eventually use a professional set of decals and apply them to make these Ecto Goggles look more accurate for how they were built.

Whatever the reason Mattel completely ignored (at least in the final production) any chance of keeping these resting against your forehead, with or without batteries. Their is a way to correct it, it’s so simple Matty/Epic could have just supplied the material and let the buyer decide. Two words: Weather Stripping

Or is that one word? I’m not in that business.

Perhaps others figured this out immediately, one ghosthead and at least another posted about this on Ghostbusters Fans. I don’t know the brand or if their is a particular thickness. Go to the blue, orange, or red hardware retailer and buy a bag (I think it comes in  bag) of weather stripping. 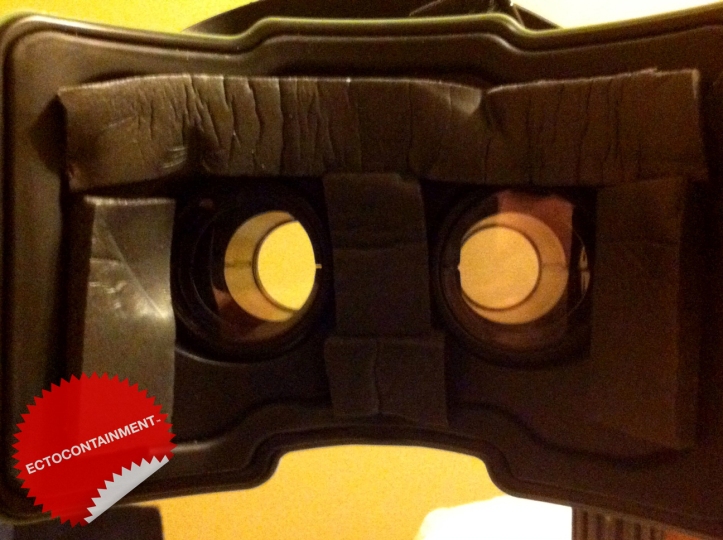 Its light, its soft, I think it has a sticky side. Cut to length and apply. It won’t look pretty and from the back it looks like you might be building 1980s artificial intelligence. For some scientific law of Newton you can wear Matty/Epic Ecto Goggles against your forehead. You don’t even have to cut the straps unless you want a tighter and more screen accurate look.

Special thanks to friend, ghosthead, and colleague of Ghostbusters NJ Bill Malkin for providing the material and making the modifications as we were working on my pack.