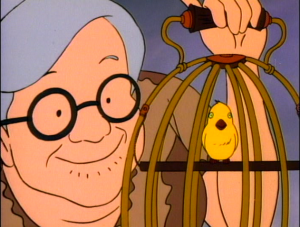 After at least a two year absence I’ve begun reviewing The Real Ghostbusters episodes again. Unlike 2008 or 2009 I will not be writing about the episodes plots almost word for word like I’m writing a report. Each episode review will have a synopsis and any of the following:

Today’s case file continues from September 1986, titled Mrs. Roger’s Neighborhood. After The Real Ghostbusters had unplugged Killerwatt the week before business has slowed down considerably. That is until a “little old lady” named Mrs. Rogers calls about her haunted house. Mrs. Rogers and her house are more then they appear.