My Only Pack Of Topps Ghostbusters II Trading Cards

I was 12 years old when Ghostbusters II was in theaters. It was closer to Thanksgiving 1989 then 4th of July when it made its theatrical release in the tiny hamlet of Nutley, NJ.

Topps, the trading carding company of my youth mostly made sports cards. Which I had a big, yet unwrapped sealed bags worth until July 2017. Only a handful mattered to me for one reason or another. In 1989 when they made trading cards specifically for Ghostbusters II, I built an early portfolio.

I don’t remember when I first saw or read this “smash movie” had cards to trade and basically collect. I know I didn’t have the entire base set of 88 cards. Which in 1989 coinage, I would have needed $39.60 USD. I wouldn’t see that kind of responsibility until I think high school.

That nerdom was different, evolving from what all I was into in the ’80s. I wouldn’t have continued to collect Ghostbusters II trading cards. Star Trek cards? I would have been all in as much as I could. Even after high school. 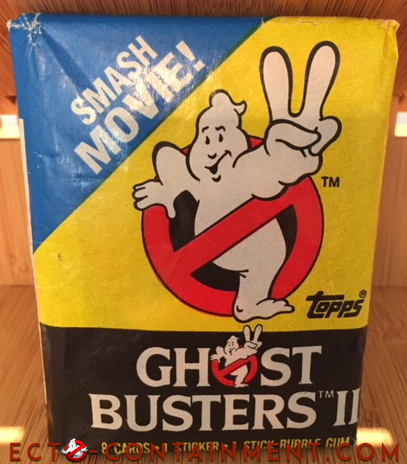 I never had a renewed interest to check around on or off line for these Ghostbusters II trading cards. I’m writing about them 28 years later because in 2011 a loose assortment of items came with the only item I needed.

The only pack I have is basically opened. I probably opened it 7 years ago so I finally decided to take photos and show off the timeless Ghostbusters II cards.

12. It’s a Egon card doing science stuff while listening to Dana. Let’s see what happens when we go to the next card. 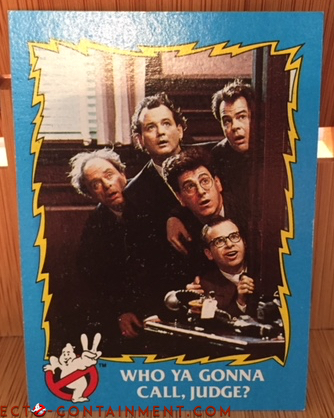 30. “You’re next bubbles.” That’s a pretty good card, showing the not suppose to be in business Ghostbusters, minus Winston after the Scoleri brothers come back from a former court appearance. At the moment I don’t remember any equipment being in the scene. I haven’t seen Ghostbusters II in probably too long. 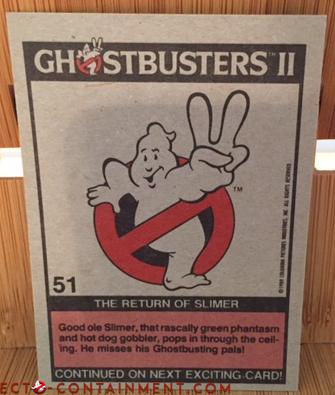 51. I remember when Slimer retuned in the montage. As far as I can recall, it wasn’t the earlier ’80s practical effects as shown on this card.

This would be an excellent time to without shame promote Robin Shelby signed Ghostbusters II trading cards auction. While supplies last!

62. To this day I’m not sure how Oscar, who we know was a baby actually walked towards the “ghost nanny.” When I was 12, I didn’t know everything about how movies were made. I was amazed adults in California would allow a baby to walk on the just sized right ledge of an apartment building. 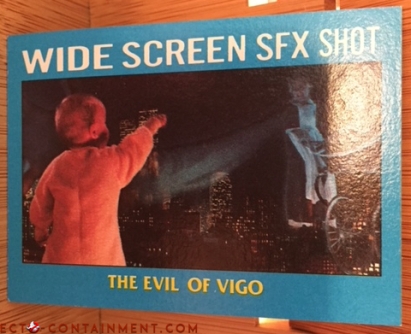 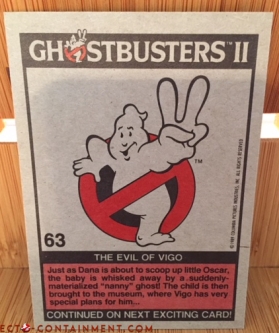 63. Hey, two consecutive cards. And a SFX one at that. Here, ghost nanny, who was a relative of Peter MacNicol reaches for Oscar. Who earlier in the evening had french bread pizza. Good call Louis. 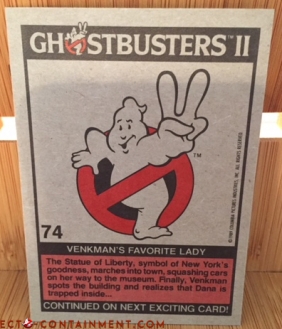 74. Wow, another SFX shot! Even without Nikes in her size, the Ghostbusters are on the way to destroy federal property and make quite an entrance! 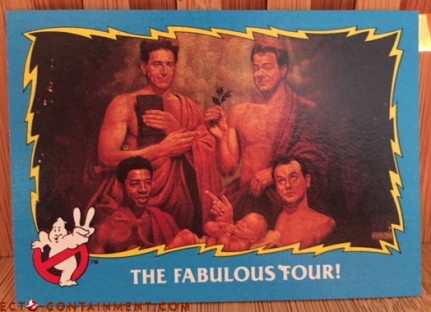 If you’ve collected or want to collect physical Topps Ghostbusters II trading cards, they can be found through on-line searches. In recent years every trading card, (or at least the basic set) is also on-line for digital preservation.

Thanks for taking a look back at part of my 1980 something childhood.